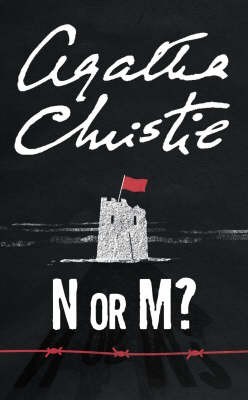 I admit to only reading this because of the television adaptation of two of the novels and I wanted to make the comparison. Now the ‘tv’ version has moved everything along a bit and taken some liberties with children ages and the time period. However I have thoroughly enjoyed the series and sought out the books knowing full well they would be different.

They are different but being the beautiful original they were better. N or M? poses a difficulty with a synopsis and review without giving away much about the plot or the outcome. Things you should note though are the book was written during the second world war it is very much a book of its time. There are spies, there is a threat of something rather untoward, coupled with a boarding house by the sea and some rather odd guests and permanent residents of the area give you plenty of clues, plenty of red herrings and plenty of humour. There is of course Major Bletchley, a character that became the concern for the establishment when the books was published. What did Christie know in 1941 that the rest of us didn’t until much later?

As for the television show, it is good and the choice of David Walliams and Jessica Raine, was a good choice and I hope the BBC recommission it as well.

What did you think of the programme? Have you read any of these stories?