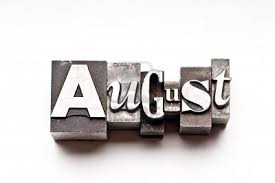 So that is it then, August is done, the last bank holiday (before Christmas) has been and everyone senses a new start as we move into Autumn. A bumper month of reading as always, due to time spent away from work.

Sadly work starts again today, but I am hoping to comfort myself knowing I can come home to a good book or two.

And I read a good book or two in August. Where to start?

A book that has August in the title of course, Angela Thirkell – August Folly. I am starting to enjoy these sojourns into a gentle world and I am hoping to venture there again soon.

I know where I want to go again and that is to Tindledale, I caught up with Alexandra Brown – The Great Village Show and which I was part of such a village, but then that is the beauty fo a book to be able to take you to another place and experience it all and escape.

The sea was a major feature of reading. Veronica Henry – High Tide* is the latest novel from this author and will be published in late september. You will have to pop back and find out what I thought about it.

The best place to pop into on the beach is Fern Britton – The Beach Cabin, a short story from this author that takes us back to Pendruggan where many of her books feature now. The cabin is a place which is going to soothe the problems between Ed and Charlotte as well as their children. You can escape everything at the sea it seems.

Emylia Hall – The Sea Between Us is a book which warranted more than five stars, it is a wonderful read and another book which features Cornwall which has dominated my reading very much in 2015. It is a highly recommended and commended book!

Not Cornwall this time but Wales, in the shape of Malcolm Pryce – Aberystwyth Mon Amour*, a rather if not very quirky private detective story set at the seafront of Aberystwyth. Private detectives and there variants also featured with Rhys Bowen – Royal Blood, Lady Georgiana, 34th in line to the throne is despatched abroad to represent the Royals at a wedding, she walks into a rather odd set up.

Even in Agatha Christie – N or M?* we are staying at a seaside boarding house during the second world war. I am not sure the coast is where I want to be when the invasion could only be days away surely?

When you are wandering along the seafront you often spot a dog or two. Cressida McLaughlin – Raincoats and Retrievers* has to walk the dogs in Primrose Terrace whatever the weather.

Of course you do not want rain if there is going to be a wedding. But then Katie Fforde – Wedding Season* shows you that whatever the money you can anything for a wedding. Flowers being one of the most important things, Ella Griffin – The Flower Arrangement* has it covered for all events. Again whilst Cornwall has been a bit of theme so far in 2015, flowers have also featured as well. This is a wonderful novel and an author I hope to return to.

I do not know what it is that appeals to me about books from Irish Female authors, but like the former I also found myself with Sheila O’Flanagan – Things We Never Say* which had been languishing needlessly on my shelf waiting to be read.

Something I return to all the time is watching TV Gold in the shape of Open All Hours, Porridge and Only Fools and Horses. The main reason apart from them being excellent programmes is David Jason – My Life*. An insight into how this young and cheeky lad got to be one of the most recognisable television icons of my lifetime and maintained such a large amount of privacy that it should be respected.

You cannot go through life without making a few mistakes and you certainly learn from them. In the case of Paula Daly – The Mistake I Made*, I made a mistake and I have learnt from it. But what was the mistake, you will have to read the review to find out.

Holidays are about indulging and I have done plenty of that. Another is t hark back to a time when I read a jolly good saga and I have found these again with Dilly Court – The Beggar Maid it has kept me up late into the night because I was so absorbed by it all.

As the month closed, I was in the lovely position of being able to start a new book…….. so much choice……

How was your August?