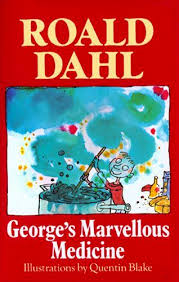 I have spent some of this year with my reading, revisiting favourite children’s authors. One of those was Roald Dahl and in fact probably still is a favourite. Having read Matilda earlier in the year I wanted to venture back and read one of the others. So why George’s Marvellous Medicine? Jackanory that is why.

I remember having read the book and thinking it thoroughly delightful in a disgusting sort of way. George Kranky is an 8 year old boy who lives on a farm with his mum, dad and grandmother and life would be alright if was not for the grandmother! George is treated like a suspicious, sneaky slave by Grandmother and like all 8 year old boys (and girls) secretly plots his revenge. Given the opportunity one day to give her a taste of her own medicine.

…He found another jar of creamy stuff labelled HAIR REMOVER.SMEAR IT ON YOUR LEGS, it said AND ALLOW TO REMAIN FOR FIVE MINUTES. GEorge tipped it all into the saucepan. There was a bottle with yellow stuff inside it called DISHWORTH’S FAMOUS DANDRUFF CURE. In it went.

George starts to create the marvellous recipe which has decided effects on his dear old grandmother, and a chicken, and a pony…..

Grandma yelled ‘Oweeeee!’ and her whole body shot up whoosh into the air…Up she went like a jack-in-the-box…and she didn’t come down…she stayed there…

George’s father, Killy Kranky thinks they can solve all problems, their own financially and the worlds by producing large animals and subsequent produce. Trying to recreate the said marvellous medicine has some disastrous effects and the Kranky household is changed forever.

But what did Jackanory do? * Simple they brought the story to life with the help of Rik Mayall who went round the house recreating the medicine. The YouTube clip below is a bit shaky and unclear but I think you get the gist.

I am sure that someone has analysed these books and they have some moral undertone and meaning. But I think this book is simply cashing in on every child’s dream of making potions, mixing mud with water and whatever else is to hand to create something magical. For George it became true, although it could not solve world hunger, which is where the message perhaps lies. As an adult reflecting back, solve the things you can solve that are manageable, though I do not suggest blowing grandparents up with a rather dodgy medicine, there are some which are just beyond our means but not necessarily our imagination.

*Jackanory is a BBC children’s television programme that has been running since the mid sixties and was where a famous actor, actress would read out children’s stories over the course of a week in five, fifteen minute episodes. Enough to hold a child’s attention.