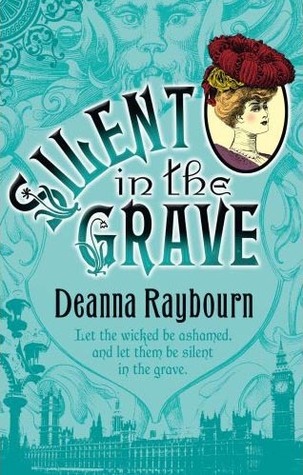 Silent in the Grave is a great discovery. Lady Julia Grey and Nicholas Brisbane make a rather odd duo, when they set out to find out if Edward, Julia’s husband was actually murdered or did he die of natural causes and his weakening heart condition.

We go on a journey through Julia’s strict mourning, with her family the March’s, her rather odd behaving brother Val, Portia her sister, `The Ghoul’ as well as her servants, Morag and Magda and even Desmond a character who seems rather insignificant at the beginning comes more important as the story goes on. Faithful servants like Aquinas and rather odd characters like Cass all make this story richer. This background all adds to the developing plot – who killed Edward? This doubt over his death is kept in a rather close knit way from many people, and as you read you feel privileged to be apart of the secrets that have been found and the clues that lead to dead ends as well as amazing discoveries and eventually the truth.

You are plunged into some rather low life parts of Victorian Society, but also some rather frivolous ones with the evening of entertainment by a `March’ aunt, tea with Fleur and the discovery of gypsies and their ways and means. So much more to say, but this would give vital clues to the plot and outcome and would be unfair to someone reading this review.

This is a real delight, if somewhat tongue in cheek it still serves as a great page turner and definitely worth a look, I can’t wait to read Book Two.

Looking back over the last ten years of posts I stumbled across the fact that the last time I had read anything by Deanna Raybourn was back in 2010.

I spoke about Deanna Raybourn in a post here

Silent in the Grave was the first book by this author and I read it long before the blog and my review has only been on Amazon and I now resurrect it here. I would like to think that my reviews have improved since this one. Over the next month I will feature the other two books that I have read and reviewed and it has inspired me to go back to this series and once again join Lady Julia Grey.

4 thoughts on “Silent in the Grave – Deanna Raybourn”