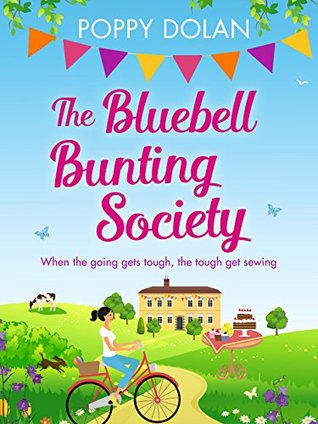 If you are a fan of Cathy Bramley, Trisha Ashley, Katie Fforde to name a few of my favourites, then you will love this book.

Connie finds herself coming up to 30 having not achieved anything that she really wanted to. Life certainly has not gone the way she thought it would. She is currently the caretaker of the local village hall, aptly named Bluebell Hall taking on the mantle after her grandmother died.

It might not be what she wanted to do, but she loves Bluebell Hall and the community and it all it stands for. If the numbers using the hall do not increase then it means the hall will have to be used for another purpose – one that the residents of the community will not want. It is a common problem, small villages do not want to see part of their history taken over by a big corporate entity but they do nothing to use the existing buildings until it is almost too late. Connie has ideas to draw people into the building and increase the numbers……..

…………….. this one involves material, thread and sewing machines.

Of course disaster is waiting to happen and you can see it hanging over their head (literally as it turns out) but with the determination of Connie and the friends she has suddenly made in the village it looks like Bluebell Hall could be staying for a little bit longer.

This is a heartwarming novel, which taps into the themes of friendship, loss and community. There is a smattering of romance, but for me that did not overtake the main substance of the novel, it nicely simmered in the background. Add into that the village feel, crafts and a lovely bright cover what more could you want from a novel.

Actually I do want more – I want to go back and see how Connie is faring and the other villagers.

The Bluebell Bunting Society is out now.

One thought on “The Bluebell Bunting Society – Poppy Dolan”