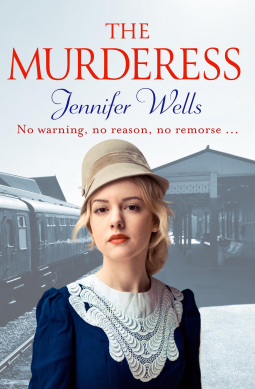 1931 – Kate witnesses her mother, Millicent push a woman in front of a train. Kate is fifteen. She doesn’t know who the woman was or why her mother did it.

1940 – Kate’s mother will possibly be out on parole within a year. She was spared her life despite taking another’s.

Kate has to face up to what her mother has done.

On the ninth anniversary of the tragic events, Kate sees a man on the station holding flowers, her memory is jogged and she is determined to find out the truth behind the event which has shaped her life, that of her father and family ever since.

The book is told from the point of view of both mother and daughter. Kate’s tale is told during the 1940 and Millicent’s in 1915 and up to the conclusion of events on that tragic day in 1931. Two women who are caught in world wars with very different experiences and lives but bound by the fact that they are mother and daughter.

It took awhile for me to get into the two ‘voices’ of the story initially but once I had found them, I let myself be swept along by the story. As I read there is one more story to tell that of the woman who was sadly pushed in front of the train. What part did she play and was I going to get her side of the story.

I was not expecting what I got from this book. Initially I thought it was going to be of the wartime saga variety which I love to read but this was much richer and deeper and had more realism. Starting the book with someone being pushed in front of a train is certainly going to get your attention.

As I read the pieces all started to come together, but whilst some may say it was obvious what was going to happen, I let it all unfold as I read and took each twist as it came and when I reached the end of the book – I was shocked. Inevitable perhaps but my experience of historical sagas has never been like this book – and I am hooked.

I am going to go and read this authors first novel, she clearly has the storytelling gene and it encompasses history within a saga setting and a bit of crime – a perfect combination for me.

The Murderess is out now.

2 thoughts on “The Murderess – Jennifer Wells”