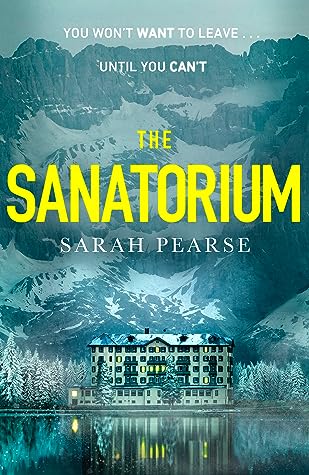 Elin and her boyfriend Will travel to a hotel in Switzerland. It is luxury but imposing and is situated far up the Alps and once was a sanatorium.

They are there to celebrate Isaac and Laure’s engagement. Isaac is Elin’s brother and Laure was once a friend of Elin and is now the manager of the hotel.

But everything is not as it seems.

Elin is on edge, she is on extended leave from her job. Her relationship with Will is perhaps at a turning point. And she still has some unanswered questions about the past and her brother, Isaac.

The hotel though has secrets to give up and as the weather takes a turn and there is no escape from that or each other.

A body is found.

No one can leave.

What is going on?

I found this book rather difficult to get into that I had thoughts of abandoning it early on, but the setting, the idea of a sanatorium repurposed as a hotel fascinated me and it was that along with the stunning scenery that kept me reading.

The rest of the plot for me was rather staged and felt like it was almost trying too hard. The interaction between the characters was almost always aggressive and whilst it may have added to the tension of the book for some readers, for me it was off putting.

I got to the end, I lurched from one theory to another along with Elin and I found the conclusion rather disappointing and slightly coming out of nowhere, with no reason I could see throughout the book for the choices made.

This book had much going for it but for me did not deliver. For some it will hit the spot and you will thoroughly enjoy no doubt.