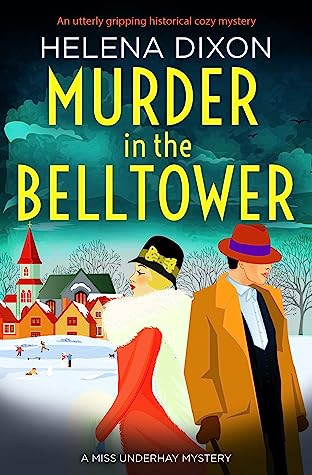 Kitty Underhay is spending Christmas at her relatives home Enderley Hall, hopefully without the dead bodies that littered the place the last time she was there for a visit.

Alongside Kitty is her dependable maid Alice, taken from the Dolphin Hotel that Kitty runs alongside her grandmother in Dartmouth.

Now that Kitty is officially stepping out with Captain Matthew Bryant, she is delighted that an invitation has been extended to him as well. To make up the eclectic house party along with Kitty’s Aunt, Uncle and cousin; there is Hattie, a distant relation of Kitty’s Uncle, Lord Medford. Simon Frobisher; a botanist, The Cornwells; two Americans wanting to experience an English Christmas and Victor and Juliet Vanderstrafen who it turns out know Matthew Bryant from his previous work.

It seems this mix of people and the transudations in the house are going to make for an interesting Christmas.

When some village disputes make there way to a cocktail party given at Enderley Hall it isn’t long before a dead body turns up.

Enter Inspector Greville, it seems there is much to this death and when rooms are mysteriously searched and it appears someone might be watching Kitty, it only seems inevitable that another body is going to be found.

But this time it looks like suicide and it seems that Kitty cannot resist all the intrigue and questions she has and when she thinks Matthew is keeping something from her, she turns to sleuthing, ably assisted by Alice who innocently with her downstairs gossip possibly hits on a clue or two herself.

This really is a wonderful example of a murder mystery set in a country house. Who are all these people thrown together? What secrets are they holding? And is their behaviour a true reflection of who they really are?

Helena Dixon carefully weaves the tale and the mystery to it’s denouement in true Christie style and you could briefly imagine that Poirot was sitting in a corner nodding sagely at Kitty. All the characters are there to be liked and loathed in equal measure and you get a real sense of setting and place as the story progresses.

Whilst each of these books can be read as standalone, there is a common thread running through them all, of course there is the burgeoning relationship between Kitty and Matthew but also the disappearance of Kitty’s mother. I implore you to start at the beginning they are an absolute joy to read.

I cannot wait to see what Kitty gets up to next.

Murder in the Belltower is published on 1 February 2021.

One thought on “Murder in the Belltower – Helena Dixon”