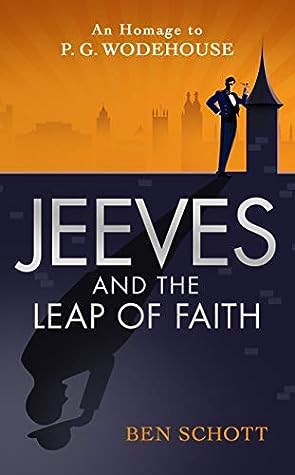 Without a doubt I am a fan of Jeeves and Wooster, first brought to my attention from the television series with Stephen Fry and Hugh Laurie in respective roles. I think it is the only time I have actually gone and read a book (in fact more than one J & W story) after watching the programme.

But to this, a ‘homage’ to the great Wodehouse with all what you would expect in a tale of Wooster ups and downs, aunts and Gussie Fink-Nottle’s, Madeline Bassett’s and the Drones Club. If you had a tick list of everything to be included in the book then this ticked all of them.

Having caught up with Schott’s first tale I find myself back with Bertie and him being K.C he is called upon a gain to help His Majesty’s Government. There are some rather unsavoury sorts in black shorts infiltrating the academic world and we are taken to Cambridge via a swift snifter to catch up with the goings on with at the Drones club.

We encounter the fairy like Madeline Bassett who is uncertain of her current beaus commitment to her and eyes up Bertie from a distance.

Aunt Agatha one of the more feared of Bertie’s aunts has a few choice words about his matrimonial status and seeks to rectify it. But when a scheme to perhaps put Aunt Agatha off reveals more than it should it seems Bertie might be able to escape with his status in tact.

Some dodgy turf accountants, taxmen and newt lovers, Bertie finds himself caught up where he doesn’t want to be. Though where ever he seems to be so does the delightful Iona who has caught his eye and also that of Jeeves.

Might things be about to change for them all?

This book is spiffing good fun and just the tonic for any dark, down day when you need some spark of light, some chink of normality, because this is as close as we are going to get to new Jeeves and Wooster stories from Wodehouse. I hope there are many more to come.

Jeeves and the Leap of Faith is out now.

2 thoughts on “Jeeves and the Leap of Faith – Ben Schott”