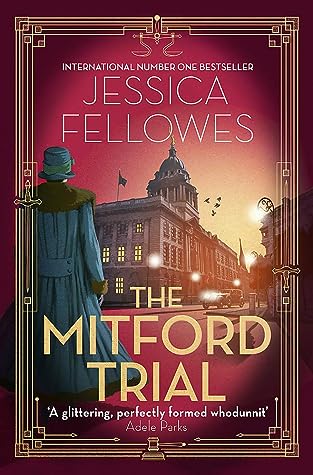 Louisa Cannon who we have met in the previous three novels in this series is set to marry policeman Guy Sullivan. I feel you need to have read all three to get the real sense of Louisa’s character development and how she has got to where she is now in this fourth book.

However the British Union of Fascists have other ideas about how Louisa and Guy are going to celebrate their wedding day.

This brings Louisa back in touch with The Mitford Sisters, who she thought she had left behind. Diana, now separated from her husband Bryan has started a love affair with Oswald Mosley and with her sister Unity obsessed with the beliefs and values of the Fascists, it seems that Louisa is going to be plunged into the darker side of politics and ever growing problems in Europe.

After first off refusing to accompany Diana, Unity and their mother on a cruise, Louisa funds herself compelled by an outside source to take up the offer and without sharing the truth with Guy she finds herself all at sea.

Onboard everything is not calm, with arguments, love affairs and fights, the atmosphere turns to murder and Louisa finds herself tangled amongst all the lies and deceit. The confessions and lies seem to permeate everyone and when the ship docks in Rome the culprits are removed.

Two years later the case is at court and everyone that was onboard seems to be a witness to something.

But what Louisa saw that trip still remains a mystery.

This is an excellent golden age crime novel, with the use of the Mitford sisters as the landscape to fictionalise the story of historic crimes. The murder like the ones before is based on the truth, information provided in the book (read at the end!)  so you can get a sense of time and place. Yet the growing unrest in Europe, the rise of Fascists and Unity’s compulsion to become close to Hitler is throughout the book and I am sure gives a great grounding into book five.

The narrative of this story goes between Louisa’s time on the cruise and the courtroom where the trial takes place, it also brings into play Tom Mitford, the brother of the infamous sisters who works as a lawyer and always appears in the background of their lives.

The concept works, as you hear evidence and the questions being asked of the witness you can go back and see what really happened. For me it felt like I was in the public gallery watching the trial unfold, a totally immersive experience.

A well written murder mystery perfect for fans of history and the gold age of crime. Long may they continue. Highly recommended.

The Mitford Trial is out now.