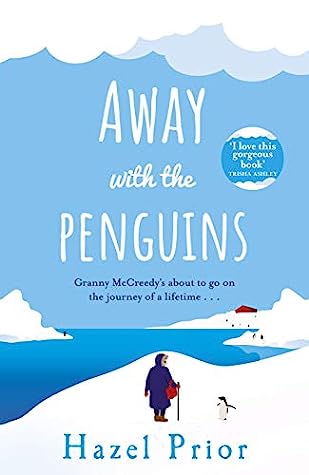 At 85 Veronica McCreedy thinks her life is almost done. Perhaps it was not the one she ever imagined but there you are. That is until she sees a documentary on Adelie penguins and decides that is what she wants to do, see these penguins for real and to make a lasting impact on the world. If helping other poor creatures than so be it.

What she doesn’t know that is perhaps Veronica is helping more than the penguins. Her very isolated life is kept busy with litter picking, telling Eileen her carer come companion of sorts to shut doors, the crossword in the Telegraph and wildlife documentaries.

The image that is painted of Veronica to begin with is a women who may well be determined, dogged in her ways but one whose mind is perhaps starting to fail her. The loss of the glasses, the mirrors needing to be removed (and then rehung) is written so beautifully that you cannot really believe the author then transports this woman to Antarctica.

Because that is where Veronica ends up, on the South Shetland Islands, accessible via a ship that docks every three weeks at a project for Adelie Penguins where three researchers have the basic facilities, food and tolerance for each other. They do not want anyone else and certainly someone who could perhaps end their days thousand of miles from anywhere.

Veronica makes an impact not just on the other researchers but also she starts to see some parallels in the life she has led with this penguins that she has grown fond of.

Miles away in Bolton, is Patrick. Initially thought of as a waste of space, a drain on the benefit system not stuck to anything, of little purpose now that his girlfriend has dumped him, who whiles away his days growing weed and trying to survive. But Veronica McCreedy enters his life too.

After a false start, Patrick becomes fascinated with Veronica and diaries reveal what happened to her in her past. When an email from one of the researchers startles Patrick into some action, he finds himself in this remote place with an old woman he barely knows, hand raising a baby chick penguin.

Can everyone reconcile themselves to their actions of the past and the events that may have shaped them and can this now move everything forward to a better future.

This book takes your breath away, the cold of the Antarctic so richly described you can almost feel it biting your nose as you watch Veronica amongst these penguins, learning about life and survival. This is a quiet book, the noise is absorbed in the snow that surrounds them all.

I came away from the story where I felt I knew Veronica’s life fully, there were no more secrets to be discovered and that she recognised that what happened to her was continuing to happen not just to Patrick but also these delightful penguins she fell in love with.

I don’t know what I was expecting from this book, the story that is contained delighted, humoured and humbled me in equal measure and was a great surprise and truly original.

Away with the Penguins is out now and was featured on Jo Whiley’s Radio 2 Show in the Book Club slot as well as Richard and Judy’s choice for this winter.

One thought on “Away with the Penguins – Hazel Prior”