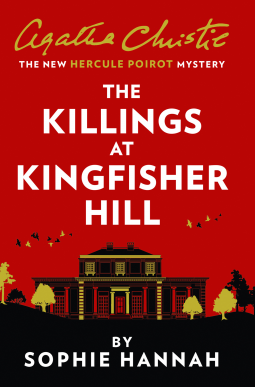 In this case, Poirot is waiting to board a coach to the Kingfisher Hill Estate. The coach is full and whilst he intends to sit with his friend and colleague Inspector Catchpool of Scotland Yard, the ramblings of a woman who thinks she will be killed if she sits a certain seat means that the journey Poirot and Catchpool take is very different.

It is all very unsettling for Poirot, especially when the real reason for going to Kingfisher Hill is at the bequest of Richard Devonport. His fiancee is waiting to be hanged – for killing his brother Frank Devonport. The rest of the Devonport family are not to know why Poirot is really there.

But when another disclosure prevents Poirot from remaining undercover and unnoticed it seems that there is much to learn about the Devonport’s and the Kingfisher Hill Estate.

With numerous confessions, lies and truths littered throughout the book, it seems that it can only take Poirot to the right answer – which it turns out has been obvious from the beginning of his quest.

Can you see what Poirot can see?

Poirot’s nature, his use of his little grey cells, the way that his sidekick, Catchpool’s seemingly innocent in what is taking place round him and with some twists along the way, make it for an entertaining and intriguing read. Likeable and loathsome characters, changeable sympathies with the people along the way, the reader is drawn right in to the puzzling mystery.

Sophie Hannah’s novels are the closet we are ever going to get to wishing for more Agatha Christie stories – they are a must for all Golden Age Crime fans.

The Killings at Kingfisher Hill is out now.