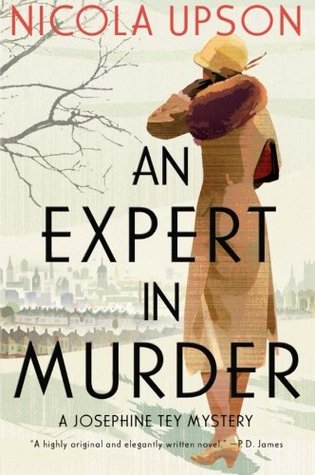 This is the first Josephine Tey novel and having read her second first I thought I would go back to where it started.

Nicola Upson has come upon the idea of using a real life author as a character in this crime series. Tey is not used as the main solving character that falls to Detective inspector Archie Penrose, but Upson weaves in the relationship that Josephine Tey has with his family, and him as well and what all links them together.

Tey happens to bump into a fan of her work on the train south from Inverness, and they strike up an instant friendship for the duration of the journey. However, tragedy strikes when the young girl is found dead, some moments after having said goodbye to Josephine. In steps Archie Penrose and he begins to discover that the murderer has left a number of odd clue that seem to all relate back to Josephine and her(written under a pseudonym) current play running in the West End, Richard of Bordeaux.

We are taken into the wonderful age of the Thirties; the Great War still has memories for a number of people, despite the threat of something else brewing over on the continent. The theatre is beginning to take off and plays, actors and agents are all fighting for something spectacular to put on. However amongst all this joy, there are many harbouring secrets and lies and another death causes Penrose much heartache as he realises that maybe Tey is the intended victim all along. The outcome is probably not what you would expect despite having worked some of it, it still came as a slight surprise, now I think I may have missed a clue or two, or maybe it is just the strength of Upson’s writing which took me to the end of the story without working it out in the first few pages.

Thrilling and exciting story, with many lovely characters, Penrose’s cousin Lettie and Ronnie bring humour to the blackest of moments and fit in very nicely with the back story. There are some racier moments put yourself as if you were in reading this in the Thirties, homosexuality was still illegal, and there is no hint but directness about what is going on between some of the cast in the theatres. I am sure it would have made some question such a book, however we are reading this in the twenty first century and perhaps now look at things differently, with the knowledge that we now have.
Yes it has elements of Agatha Christie and the ilk – but so what. It is a different way of making the basic murder mystery genre work and I think successfully, certainly to keep me reading once I was gripped by the whole story.

This review was first published on Amazon in early 2010 and is featured on this blog as part of my look back at the last ten years of blogging.