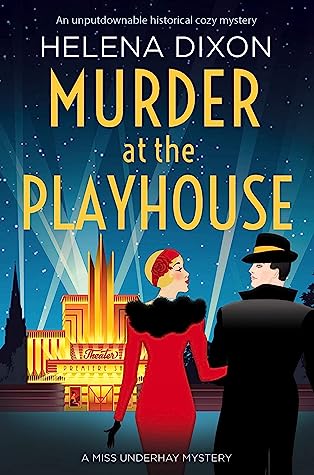 Kitty Underhay is definitely on track to be a popular favourite amongst fans of cosy mysteries and with this her third adventure.

Kitty having still not made it up with Matthew Bryant the debonair ex Army Captain and now private investigator from the previous two novels, she finds herself rather lost and missing him.

Matthew is much in the same mood, but that is all forgotten when a knock at his door reveals the police come to arrest him for murder.

Kitty rushes to his aid.

The deceased is a young actress on the cusp of something bigger, Pearl Bright, found strangled with one of Matthew’s bootlaces. There is a straightforward believable explanation from Matthew.

Stanley Davenport a theatre impresario and on verge of a knighthood is as well as Matthew’s neighbours seemed convinced it his him and that there is no need to look any further, especially not at Stanley Davenport and his family and associates seem to have a lot to hide.

Kitty manages through Mrs Craven to get to know the Davenport’s and she finds herself centre stage with helping with a local theatre show for a charity. Being this involved means she might be able to get to the truth if it all plays out right.

It will be alright on the night – surely?

Regular characters are back, including the insurmountable Mrs Craven as well as Kitty’s maid at the hotel, Alice who is a great character and I am pleased she is featuring more dominantly. Her sound advice and obvious observations are a great for Kitty.

The sub plot of Kitty’s missing mother is still throughout this book and Matthew is kept occupied with this and we start to find out a bit more of what might have happened to her.

All in all a great mystery with good characters both likeable and absolutely dreadful that you love them and the continual mystery makes we excited to read book four!

Murder at the Playhouse is published on 30 June.

Catch up with Kitty from the beginning:

Murder at the Dolphin Hotel