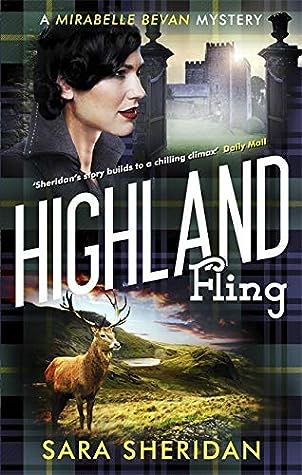 I have been absorbed with this series since the beginning. For fans of murder mysteries set in the past this is for you. To make it different from many other series of books out there – this has strong female characters, it is the 1950s, racism is still clearly prevalent and the memories of war are still not quite in the long forgotten past. Mainly based in and around Brighton this time we take a train journey to the Highlands.

For Mirabelle this is a holiday with Superintendent Alan McGregor her beau and very much intellectual equal. They are to visit Alan’s family home and meet some of his family, the Robertsons.

Being embraced into a glamorous family life with big houses, servants and cocktails is a bit of a shock for Mirabelle but she finds she instantly warms to these people.

Then a body is found in the orangery.

No matter where Mirabelle or Alan go, crime seems to surround them.

The body is an American fashion designer with links to Russia. As the Cold War is very much at the forefront of everyone’s minds, it seems that there may be more to this murder.

The urge to investigate and find out what happens is too much to resist and when it seems there is mysteries unsolved about the house and the Highlands, Mirabelle finds herself questioning people about the murder but also her own actions and limitations to her relationship with Alan.

This holiday is going to be one to remember for them.

Great to see Mirabelle and Alan’s relationship flourish and there is no doubt that they are not sticking to the conventions of the time. Even the Robertsons recognise this and it was a breath of fresh air to see such things, but to also know that is was still of time of great change.

Whilst the world changed, so did Mirabelle and Alan. The Highlands was definitely a place they could say was a turning point for them.

A big house murder mystery, spies, servants, ghosts and secrets. Everything you want from a book and one of the best examples of this type of story.

For me well written and constructed and probably the best of the series (so far) and whilst I always recommend starting at the beginning, this would be a good book to dip into as the main characters are away from their normal lives and surroundings. You can then have the joy of catching up with the rest of the series – lucky you!

Highland Fling is published on 4 June.