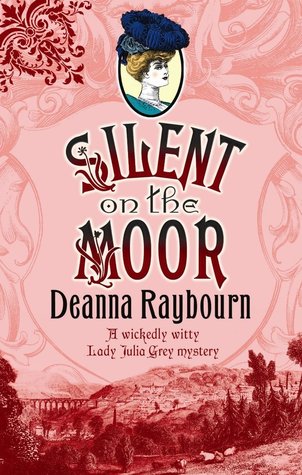 This is the third in the Lady Julia Grey Mysteries certainly better than the second and probably as good as the first, Deanna Raybourn has found her way with this character as well as other supporting characters.

Lady Julia Grey along with her sister Portia decide to go and stay with Nicholas Brisbane, the man that Lady Julia met whilst stood over her husband’s dead body (see Silent in the Grave). His new property is in Yorkshire and there is something not quite right about it and the remaining residents the Allenby’s who are intrinsically connected to the house and somehow to Brisbane. Lady Allenby is widowed and only has her two daughters Hilda and Ailith Allenby for company within the house, her son Redwall died after returning from Egypt after being exposed in Egyptology circles and ruining his reputation. However Redwall’s fascination with Egyptology leads Lady Julia to start cataloguing his treasures from Egypt to keep her mind off the annoyance in her life that is Brisbane. This cataloguing leads to the opening up of the past, walls and coffins which results in some devastating actions.

Lady Julia also spends time with Rosalie, living on the crossroads on the moor, a gypsy who elects to stay in one place for a personal reason but helps many people with tonics and teas from everything natural. Rosalie has connections with Brisbane, and Lady Julia discovers a lot about his past, in turn Brisbane also has much confirmed about his background.

Raybourn has used her obvious love of all things gothic with this book – it has resonances of Jane Eyre, what is the history behind the women seemingly stuck in the house. Wuthering Heights, the wildness of the moor is described beautifully and poetically that it really gave a grave and dark foreboding sense to the property ironically called Grimsgrave. There is the witticism, and I love Lady Julia Grey’s sister Portia who bounces off all the characters very well, despite her own life story. Their relationships with their maids’ makes for amusing reading, and one wonders who is really in charge them or Morag and Minna. Romance is the air as we see it grow further into the open with Lady Julia and Brisbane. My only concern is that if they get together then will we lose that wonderful sparring and bantering they have which makes for their rich characters.

The story does seem somewhat slow, but whilst it is not a classic whodunit it has some depth, and makes you question the actions of those who are trapped at Grimsgrave. It is a wonderful insight to Victorian society not just from the upper echelons but also the lower ones, the maids stories are covered, even the wandering Gypsies(prominent in all these books) are covered with such care, that it becomes a book to show what life was like at that time, and how it affects others. In some cases the attempted murders become a back story.

I do hope there will be another book, hinted at definitely in the last couple of pages, but please do not lose the wonderful relationship that Lady Julia and Brisbane have developed.

This review was first published on Amazon in 2010 and is featured on this blog as part of my look back at the last ten years of blogging.