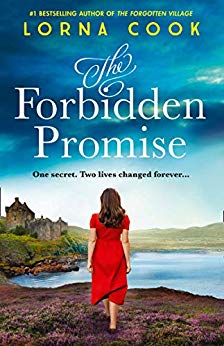 Second novels can sometimes suffer from sort of ‘syndrome’ not quite as good as the first, the most difficult to write, sweated over for months and months on end, massive edits and rewrites and never quite reaching the pinnacle of the first novel.

In the case of The Forbidden Promise this suffers with none of these, though I am unsure if the author suffered any of the aforementioned symptoms. For me this second novel is better than the first (and that was good) and shows a great example of dual time narrative, compelling storylines and wonderfully drawn characters.

Present day. Invermoray House in Scotland. The current residents of the home, Liz and her son James are struggling to make ends meet and the only way is for the house to be made to pay  its way. A Bed and Breakfast seems a good idea with some typical HIghland pursuits for any guest that might fancy it.

Kate is famed for her PR skills and that was her previous role in London but when an incident leads her to want to hid from all she knows she takes refuge in a job at Invermoray House. Intrigued by the mystery of the house she does some research to discover a family bible with one of the names crossed out – Constance McLay.

1920. Invermoray House. Constance McLay’s 21st birthday party. War has yet to really touch them so far north, it appears nothing has changed. But war is coming in many forms as young men, including Constance’s brother and his friend join up and the estate workers go to fight for their country.

With the excuse of an headache, Constance escapees her own celebrations and wanders down to the loch.

There she sees a spitfire, dive and crash into the loch. Instinct kicks in and she saves the pilot and with one sweeping gestures promises to keep him safe in the abandoned ghillies cottage. However Constance finds that this promise is hard to keep.

As war starts to touch Invermoray House more directly, Constance finds that she is torn between her heart and her head.

Some eighty years later as Kate tries to find out more about Constance she also finds that her heart and her head are working independently of each other.

As the plot goes back and forth you start to form a picture of what life was like for Constance and also how it is perceived by Kate, trying to find out more about her, as if you were being told the same story from different perspectives.

What also holds the book up as excellent is the fact the author uses the landscape to be as much of a character as the characters themselves. This adds weight and depth to the plot and kept me hooked as I turned the pages wanting to find out the truth, the secrets, the lies and the promises that were made.

Lorna Cook is fast becoming an author you need to look out for.

The Forbidden Promise is published on the 19th March.