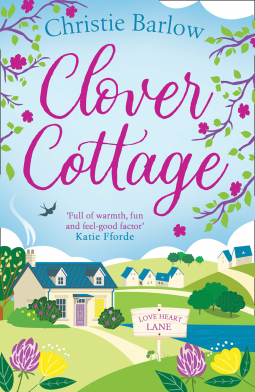 This is the third book in the Love Heart Lane series and I am delighted once again to be transported North to the wonderful Scottish village of Heartcross.

Vet Rory Scott has always wanted to do something more than be the Vet at his father’s practice in Heartcross. He wanted to branch out, do something, see the world and have an impact on animals worldwide not just locally.

However feeling an obligation to his father and mother he stays in Heartcross and starts to settle with girlfriend, Allie. It all seems to be going well until…

Rory’s father rents out the house that he is currently living in and gives Clover Cottage, rundown and in need of a lot of TLC to Rory. But he is not telling Rory something and this coupled with the stubborn need not to improve or the practice frustrates Rory.

Even more so when celebrity Zach Turner and his dog Sydney turn up in the area. Whilst Rory can help Sydney the dog he has to rely on other people in another place to be able to fulfill the dream. And when Zach makes him an offer it looks like he would be foolish to refuse it.

Allie has not got the drive of her boyfriend Rory, she loves him, she loves the village and she now certainly loves Clover COttage ans she can see her future there. She has spent many years being uprooted and thinks she has now found her final place to stay but why does Rory want to go further afield?

Can these two people seemingly going in opposite directions actually get to where they are meant to be – together?

Coming back to Heartcross and all the people I have got to know is like catching up with friends, life goes on and just now and again you need to pop in and see what has been happening and I was so glad I did. Even more thrilling when you know there is another chance to catch up with them all later in the year.

For fans of good women’s fiction which is not light and fluffy but has real depth of emotion and character – read them all from the beginning of the series. You won’t regret it!