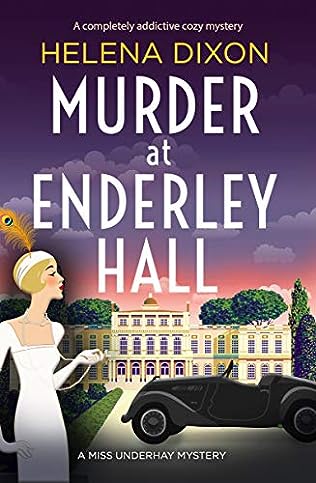 This is the second novel from Helena Dixon and the second to also feature the delightful Kitty Underhay, You do not need to have read the first, but it does help fill in a bit of the background of Kitty and the dashing private detective Matt Bryant.

Kitty having discovered family she did not know she had and that they lived fairly close by she goes on a visit.

Having borrowed a chambermaid from the hotel she lives in with her grandmother, Kitty sets off on a new adventure to meet these relatives.

There is an Aunt and Uncle plus a cousin, as well as a few more assmeled house guests that make up such a house party. Her Uncle is obviously involved in some important government work and as tensions are growing in Europe, it is 1933 and things are changing, there is an air of mystery to the whole proceedings especially when some important papers go missing.

Then old Nanny Thoms is found dead at the bottom of the stairs.

Kitt’s friend Matt Bryant turns up and proves to be useful in getting to what is really going on at Enederly Hall.

Then another body turns up, guest are arrested and mysterious faces at the window and bodies in lakes all start to get a bit too much for Kitty.

Surely Kitty is not going to lose the family she has only just found?

This is a wonderful second novel and starts to fill in the gaps about Kitty’s family. It is a wonderful take on a the country house murder mystery and the growing friendship between Kitty and Matt is delightful. The added dimension of it being a history murder mystery is all the more interesting as you can see how in these interwar years, the First World War is still very much affecting people and the obvious growing threat in Europe is goign to have some sort of effect.

There is much to like about these two novels so far in the series I look forward to seeing what other mischief Kitty gets embroiled in. The series could potentially run for a while.

Murder at Enderley Hall is published on 19 March 2020.