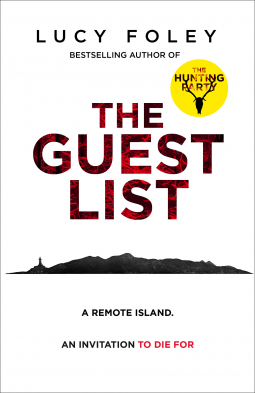 This book has echoes of And Then There Were None before you even start, a remote island and invitations to certain people to stay on the island.

The event which you everyone wants to be on the guest list for is the wedding of Jules and Will.

Jules is a celebrated magazine publisher.

Will is a rising star in television on a ‘survival’ type programme.

This is all about doing it in style to make everyone else envious if not completely jealous.

The guests they are invite are the ones as well as Jules and Will that tell the story of how everyone came to be on this island, invited to the wedding.

Olivia, Jules half sister and someone who does not want to be there. She is harbouring a secret, a secret that if she reveals it will upset everyone. No one knows. But she has to put on a brave face and forget her past and be the bridesmaid her sister is expecting her to be.

Hannah is the plus one, she is in fact Charlie, Jules best friend wife and she is very much feeling more than a spare part than a plus one. Charlie is to be the master of ceremonies at the wedding, leaving Hannah to very much disappear into the background but by doing so she learns some devastating information from her past.

Johnno is the best man – but not the man you would expect a well known face like Will to have. Him and Johnno have a past and with that is secrets which need to remain hidden. Trouble is the other ushers are all old school friends of both Will and Johnno and it seems that some rituals still need to be reenacted in adulthood as they did in childhood.

Then there is Aoife, the outsider to all of the people on the island. It is her island, it is her house, she is in fact the wedding planner and is there to facilitate anything that Jules and Will want as this is her chance to make a name for herself. Though Jules and Will are completely unaware of the name she actually wants to make for herself.

Having only recently read The Hunting Party, I was immediately hooked by the way Foley crafts her novels. As we go from character to character they all in turn fill in information and build a picture of not just themselves but each other. The secondary characters are also somehow cleverly well rounded and developed as well, as they do play an important part in this story.

There are plenty of people to dislike, in fact probably more than to like and empathise with which means they get under your skin, they make you keep turning the page.

As the wedding proceeds, events taken their own turn. As the island batters a storm, a storm is gathering in the wedding party and there might not be any survivors from either storm.

Completely addictive and keeps you guessing right from the beginning.

A good follow up to The Hunting Party and I personally hope for more the same from the author.

The Guest List is published on the 20th February.