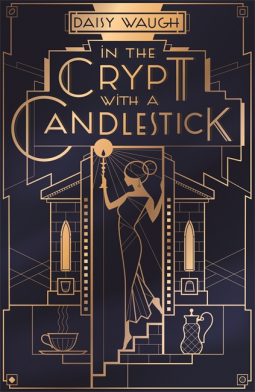 A new author to me and I was drawn to the cover without a doubt and the promise of:

In the traditions of two great but very different British writers, Agatha Christie and P.G. Wodehouse, Waugh’s hilarious and entirely original twist on the country house murder mystery comes complete with stiff upper lips, even stiffer drinks, and any stiffs that might embarrass the family getting smartly brushed under the carpet…

At Tode Hall, at ninety three Sir Ecgbert has finally died. Widow Lady Tode no longer wants to be lady of the manor and neither of her three children have much interest in the Tode Hall.

So the hall and all its residents is passed across to a distant relative much to the chagrin of the remaining family and staff.

However Lady Tode’s idea of spending her twilight years in Capri are thwarted when she ends up dead in the Hall’s mausoleum. What follows is a half hearted attempt to find out who the culprit was and with the aid of the granddaughter of a former employee and a ghost it seems the answer has been staring them in the face all the time.

This is not your normal murder mystery, a book which had a sense of wanting to be stuck in the past, the cover gives that impression but was very much in the present. The correlations to Wodehouse I could see, think Blandings not Jeeves and I am not sure if it has the real sense of Christie, that you may see in other homages.

However it was humourous in an almost pastiche to the country house murder mystery and was a passable diversion. It perhaps did not deliver as well as it could have done. Shame it had potential.

In the Crypt with a Candlestick is published on 20 February.

4 thoughts on “In the Crypt with the Candlestick – Daisy Waugh”