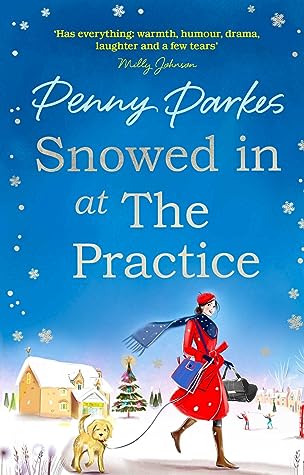 Time for another appointment with the Doctors at the Larkford Surgery.

Whilst Dr Holly Graham is on maternity leave and struggling to make everyone else understand that is she just not simply the mother of two sets of twins, she is also a wife, a friend and a doctor. There must be a better way to transition back to working than everyone seems to be suggesting at the moment.

Perhaps talking to her patients on a normal level and with no pressure is the only way to go, but when an offer of an feature on a radio show and also a fixture at the Rugby Club, it seems that Holly’s options are even greater than she first thought.

Dr Alice Walker and her amazing dog Coco are still working their magic but it seems that Alice has also brought a fellow doctor and friend Dr Tilly Grainger along who is struggling to fit in not just in the village of Larkford where hearts are being broken by the day, but as a doctor in something other than the war zones she had been used to. Is there a project that Tilly can call her own and something where she feels she is making a difference?

Dr Dan Carter and Practice Manager Grace are facing some difficult decisions and it seems that their future is decided for them when someone captures Dan’s heart.

Along with this we have all the other wonderful characters which have featured in previous Larkford novels, the wonder that is Elsie, hellbent on being the centre of attention wherever she may go and of course Holly’s friend Lizzie and former rock star Connor whose life is about to be changed once again.

This book like the previous three is a complete joy to read. You are completely immersed in the world of Larkford and the residents and of course the patients as well as the doctors at the surgery. There are some real tough topics dealt with in this book. You might need to harden your heart or just let the tears flow as I did. Nothing is off limits. It is both joyous and sad in equal measure.

What makes this series if books stand out is the clear detail that the author has gone into to understand the workings of a local GP practice, a practice which I am sure like many around the country is suffering from an overload of paperwork, government targets and cut backs on the things that really matter like time with the patients. I don’t know how Penny Parkes does it but she has brought a ‘hot topic’ into fiction and added a dose of characters and created a series which I think could run and run.

I prescribe this series of books to everyone.

Snowed in at the Practice is out now.