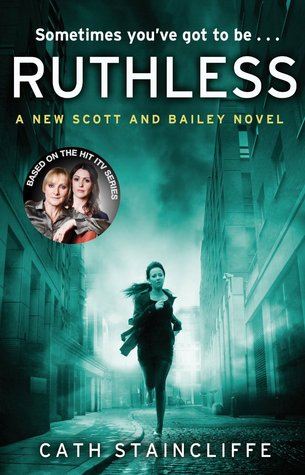 Back in 2013, I reviewed Bleed Like Me the second novel to feature Scott and Bailey (yes the ITV Series) and was interested in reading a third. Cath Staincliffe, a lovely lady who I have met and has had written some cracking books delivered a third in 2014.

Shamefully it has taken my another five years to read it. I feel like I should go and stand in a corner somewhere and think about the error of my ways.

So I am back with Gill Murray, life with her son is balanced but her ex husband is just one step away from falling apart in front of everyone and losing everything.

Janet Scott, recovering from the fall out of events in the previous book. Trying to hold together a family.

Rachel Bailey married to Sean, although both I and her are not sure why. She seems suffocated by it and spends a lot of time running.

Rachel was running the night when a blaze erupted at a abandoned chapel, she witnessed the scene but what and who else did she?

The next day, it turns out the blaze was arson and there was a fatality.

Cath Staincliffe takes us straight into the police work, the station, the briefings, the allocation of roles and the cameraride and banter between colleagues. How do you keep all that going when it seems you private life is becoming so difficult.

Then there is another fire and this time there are two bodies.

Is this the start of something frightening in the area?

With gunshots, confessions, drugs and domestics this book has it all. Well plotted and I hate to say a great example of a ‘police procedural’ novel that I sometimes hear bandied about. Except somehow we manage to get under the skin of the three main detectives and that gives that fragility to humans dealing with some horrific events.

A great read and well worth the wait.

Thank you to the publisher via netgalley for the opportunity to read this book albeit five years after publication.

Ruthless is the third in the series with Scott and Bailey. If you want to read them all then start with Dead to Me and then Bleed Like Me.

Scott and Bailey can be found repeated on ITV3 (in the UK) if you want to see everything brought to life. I only watched a few episodes of the first series, but they are very true to the characters and bring them to life, great casting.