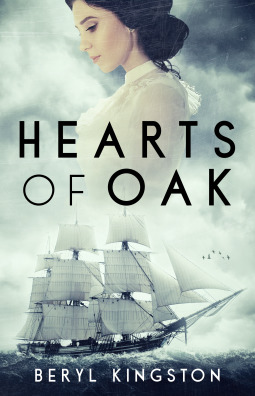 This is a reissue of a book which was previously published as Girl on the Orlop Deck.

I had not heard of the book but the author I have read before, many many years ago before I started recording what I read. What caught my eye about this book was the title – a song I am familiar with through work. Interestingly despite experiencing 18 years worth of Trafalgar Nights, I did not realise the words were by David Garrick who coincidentally featured a book I had read a few weeks previous.

I digress, this is the story of Marianne and Jem. Newly married Jem a trained carpenter behave abominably on his wedding night and goes to seek solace in the bottom of a jug of ale. Whilst a a low point he make friends with two gentlemen and finds himself the very next day onboard ship, having taken the king’s shilling and having no recollection of the event.

Marianne furious that her husband has already abandoned her, learns that he has joined the navy and decides to follow him. Being female is not going to stop her and so with her brothers breeches, Marianne becomes Matt Morris.

Or will being in Nelson’s Navy away from home for two years plus having traversed the oceans mean that Marianne and Jem will always be lost to each other?

This book gives you life onboard a Nelson ship even if you had never thought about how they all coexisted together – and of course women went to sea even in them days. Marianne in fact encounters others across her journey, but she also encounters tragedy, heartache, love and war and is at the heart of the battle of Trafalgar and sees the great man, Nelson fall.

The plot moves at a fast pace for an event which took a long time building to the battle we know as the fleets chased each other around the seas.

Whilst I have always known Beryl Kingston for writing sagas this was certainly a step up maybe because I had a lot of prior knowledge, living in Portsmouth where Nelson set sail from and also recognising the names of Collingwood and what actually did happen at the battle. That said even if you do not have this prior knowledge the book goes into great detail without it being dry and scholarly and it is all given a sense of place and time.

I was somewhat disappointed quite near the end when the journey of Victory towards Plymouth went slightly wrong in its geography, you do not reach Torquay before Weymouth unless you have some serious navigating problems. I am hoping as I read this from a ARC that the mistake will have been amended.

For fans of historical fiction and seeing one our greatest Naval battles brought to life through someone else’s eyes.

Hearts of Oak is out now.