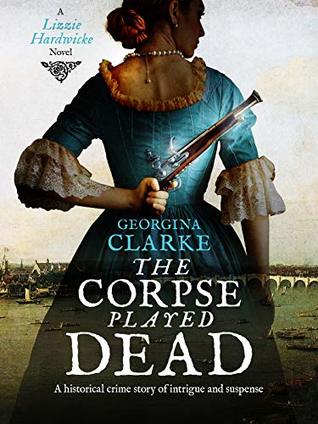 We last saw Lizzie Hardwicke in the role of prostitute – a role she chose not one she playing but now in this second novel of the series, Lizzie is to take on another role, in fact more than one.

A role that is going to put her right in the middle of the action.

Asked to go undercover by a Bow Street Magistrate – this is the days before a recognisable police force – Lizzie goes to Drury Lane, to a theatre to work as a seamstress.

The theatre owned by David Garrick (yes the very same) has had some strange accidents and events going on.

Lizzie is there to observe not the performance on the stage but that of what is going on behind the scenes – much more intriguing.

As rich men are paid court in a not so dissimilar way to Lizzies occupation, actors and actress, playwrights and stage hands all witness the way money is gained to help the theatre survive.

With his throat cut……

Enter the magistrate Mr Fielding and one of the inspectors Will Davenport who we met in the first novel and who has developed a fondness for Lizzie despite her chosen path in life.

Lizzie knows that she cannot leave this role until she has found out the truth about the dead man and whilst it seems the perpetrator has been caught and the case solved there are too many loose ends and unwoven threads to the story like the dresses and cuffs that Lizzie has been mending when she has been inconspicuously listening and observing.

Who would pay attention to a grubby, second seamstress in a room full of egos and money?

If I did not know this was fiction I would believe I was reading an account of the time and that this was a piece of historical nonfiction of the Georgian time in the depths of some of the rather seedier parts of London.

The fact that it is before a police force and our main protagonist is female and a prostitute adds to the depth of the plot and makes is a page turner. I learnt from this book as I did from her debut and the dedicated and detailed research by the author is clearly evident.

It is that which means I wait with anticipation as to where Lizzie Hardwicke is going to turn up next and who she is going to encounter and also perhaps in time she will have enough money saved to stop her current profession and find true happiness with Will Davenport….. then again the author might have another idea. How exciting!

The Corpse Played Dead is published on 19th August.

What to know more about Georgina Clarke and of course Lizzie Hardwicke?

Read an excerpt from her debut novel Death and the Harlot here.  My review of the book can be found here if you are still not sure. If you are a fan of crime and history you will thoroughly enjoy this new series of books.