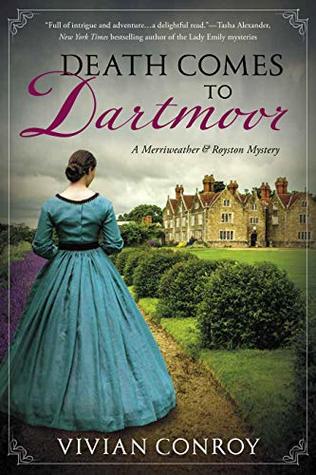 This is the second in the Merriweather and Royston mystery series.

Merriweather is in fact Merula Merriweather, who saved her Uncle from falsely being hanged for murder in the first book. A trip to Dartmoor is prescribed to blow away the cobwebs and soothe the nerves.

Royston is in fact Lord Rayven Royston a zoologist who is using natural history as his last vestige of respectability after some dubious events. Royston helped Merriweather with the exoneration of her uncle. He agrees to accompany her on her trip.

To maintain the air of respectability there is also Lamb, Merriweather’s maid and Bowspirit, Royston’s valet.

Surely Victorian Devon is going to be less dangerous than Victorian London….

But when they get to the house they are meant to be staying at, after being diverted by the wreckmaster high up on the moor, all is not as it seems. Oaks, their host seems to be in some sort of delirium, his maid has disappeared, the natural history specimens he collects seem to be coming to life and the local villagers are baying for his blood.

Then the maid’s body turns up and it looks like Oaks is responsible.

This is not the quiet respite that Merriweather and Royston were after. And it looks like their unlikely detective partnership is going to have to be used again to solve the mystery.

I think to understand in more depth the relationship between the two main characters you needed to have read the first book, I am sure that would have made the second book, this one, more enjoyable for me. An interesting concept as a series of novels and I thoroughly enjoyed the setting and the landscape descriptions. I think the series can develop but there was something just missing from the storytelling which just didn’t grab me and make me want to read more. I really wish I knew what it was.

An acceptable book to while away a few hours in front of the fire and escape from the present day.

Thank you to the publisher and netgalley for the opportunity to read this book in return for an honest review.

Death comes to Dartmoor is published on 13 August.