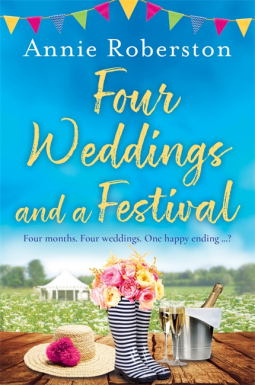 If you immediately misread this title as Four Weddings and a Funeral then you are going to enjoy the book immensely. In fact if you are a Richard Curtis fan and have enjoyed Four Weddings, Notting Hill and Bridget Jones then this is definitely the book for you. It is littered with references which whilst I got some only a true fan would have got them all.

Friends; Bea, Kat, Lizzie and Hannah joked for many years about all getting married in the same summer and when one engagement leads to another, it looks like this might well be the case.

However, Bea starts to have doubts. She turns down her engagement because she does not think that Simon is the man for her. She thinks she might have found that makes her go weak at the knees when he takes her photo at the first wedding of the season, but it seems he has a promise to fulfil.

Lizzie the first to get married, in the fields with a very countryside themed wedding is marrying the man she is clearly in love with, doting and besotted with. Except that he is about to go back on tour and that will mean leaving her behind.

Hannah is beyond excited about being a wife but has failed to point out to her grandparents who are paying for the wedding, that Remy her partner is in fact female. They might notice at some point all her friends keep telling her.

Kat is practical and certainly doesn’t want any of the fuss and trimmings of other weddings. But does that mean she is not committed? And is Henry feeling the same?

But when events at a festival take life on a different turn and a wedding you never saw coming happens then will these four women find their happy ever after just like in the Richard Curtis film.

This is a lighthearted book very much in line with the films that it liberally refers to throughout, great as a beach read but not if you want something with a bit more depth which I generally do.

Four Weddings and a Festival is out now.