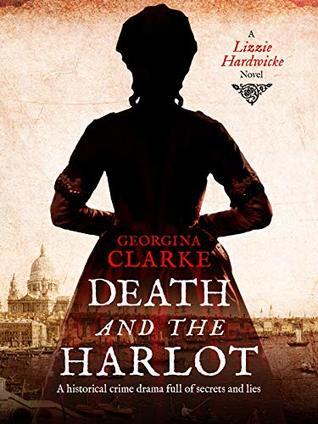 Lizzie Hardwicke is a woman who didn’t need to follow the path she finds herself on.

Actions from the past mean she is estranged from her father and this has led her to the streets of Soho. It is 1759, it is not safe for anyone really to walking the streets of London, let alone work on or near them. Crime is rife, highwaymen are gathering reputation and force and the police are but a mere dream for the future.

Lizzie though seems to find herself in the fortunate position of becoming one of Mrs ‘Ma’ Farley’s girls. Living and working in what some might see as a respectable milliners but others know as a house where gentlemen can find entertainment and solace with certain types of women.

Lizzie is one such woman. She is luckier than most. That is until her last client ends up dead.

And Lizzie it appears was the last person to see him alive so she must be the murderer.

Enter William Davenport working for the magistrate and he thinks the same, but there is something about Lizzie Hardwicke which sets her above the rest of the potential suspects – the lack of evidence being the main factor.

Lizzie works out the only way to clear her name and save her from the noose is to do some investigating herself. Plunged further into the world of crime, blackmail, fraud and more murder Lizzie finds herself in some very dark places.

With plenty of twists and inevitable red herrings which make up a good crime novel this is an intriguing and interesting read. I had no inclination of the culprit and when it came it was much as a surprise to me as it was to Lizzie.

Interesting relationships are formed between the characters and we get to see perhaps a small glimpse of what life was like for prostitutes in the 18th century both those who could afford that little bit of extra protection and those that couldn’t. Add to that the gentlemen who visited them and the magistrates and runners who tried to keep the peace and you have an interesting way of weaving stories, characters and history together.

To engage a more modern audience the book is very much written on the language of now and the authors note at the end explains the reasons behind this but there is enough archaic language in there to get a sense of the time and place.

I felt I was transported back in time to a good old-fashioned murder mystery with all the historical elements to keep me reading and there is definitely an interesting relationship developing between Lizzie and William which I hope we get to see more of in the future.

For fans of murder mysteries or historical fiction or a combination of the both – this debut novel has to be just the beginning for this author.

Death and the Harlot will be published on 13th May.