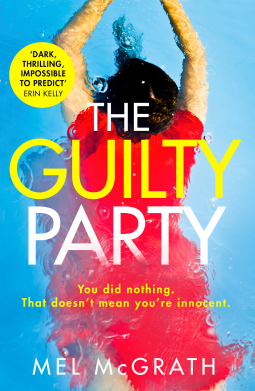 Four friends escape for a weekend, to celebrate a birthday.

But celebrations at a music festival for a previous birthday were marred by being witness to a rape.

None of the four did anything to help.

The woman found dead in the river, now has an identity.

Can any of the four feel guilty about not helping? Or did they know more than they have said?

The celebrations at the weekend away are told chronologically going forward..

The celebrations at the music festival are told sequentially going backwards from the witness of the crime.

I found this book very dark and depressing in places and this made it a bit of a slog to get through it. The characters were not likeable, whilst I think that added to the story in some ways it did mean that you never felt any particular empathy and certainly no sympathy with any of them.

An interesting concept as a plotline which kept me hooked to the story as it unfolds forward and backwards, you start to see what each person might have done and what role they may have played. But ultimately they didn’t do anything or did they?

This author is new to me, and whilst perhaps this wasn’t a book that ticked all the boxes for me, I would be interested to read what else she was written.

The Guilty Party is published on 7 March.