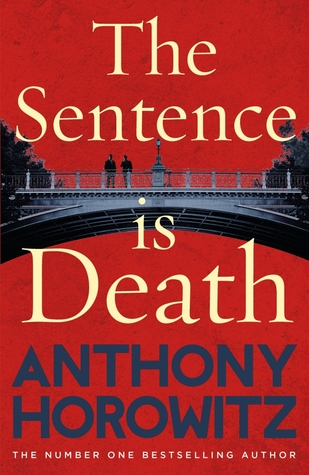 Introduced to us in The Word is Murder this is the second Daniel Hawthorne mystery which features the author, Horowitz as a character in his own novel. It sounds bizarre and complicated but it does work really well. There are moments when you think that perhaps you are reading a true crime novel or an autobiography but no this is a very clever piece of fiction.

Richard Pryce is bludgeoned to death by a very expensive bottle of wine.

But he never drank.

His last words were “you shouldn’t be here. It’s too late”

What do those words really mean and who was there?

And why was the number 182 painted on the wall?

All rather strange unconnected clues that Daniel Hawthorne is confronted with when he is called to help the police. No longer a detective but called in when it becomes all too baffling.

In tow, comes Horowitz who is writing about Hawthorne and whilst we see something more of his hidden character and background, Horowitz is just as fascinated with the Hawthorne as he is about the death of Richard Pryce.

The question is who will get to the truth first, the police, Hawthorne or Horowitz?

This book is full of twists, red herrings and glimpses of Foyle’s War being recorded which add to the many layers of the novel. The pace of the plot keeps you reading as you discover more about the victim, the detective, the author and of course eventually the killer.

A well written murder mystery novel that has that other element, that of the author being a character in the book, that gives it that edge above many other formulaic books out there that may well fit into the genre.

The Sentence is Death is out now.

One thought on “The Sentence is Death – Anthony Horowtiz”