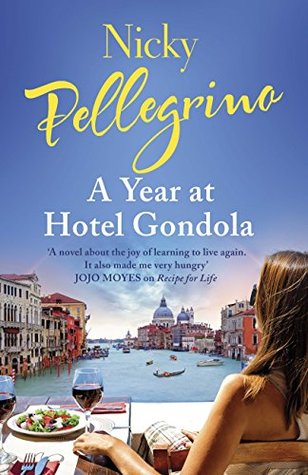 The beauty of books means that you can be transported away to other places, times and foreign lands without as much as going to an airport or spending any money.

It is very much so with any book you pick up by Nicky Pellegrino. Some of them are better than others and I was a bit disappointed with this one I have to say.

Kat is a food writer, adventurer and television star. Not one to stay in any place for too long, she travels the world. At 50 with her mother’s words of ‘probably got twenty good years left’ ringing her ears, she thinks perhaps putting down some roots and grounding herself for a whole year might be the answer.

With the fall back of writing a book rather than a television programme, Kat discovers Venice, Hotel Gondola and a wonderful man, the deal is they see what happens in the year – it is Kat’s get out clause clearly.

Venice gets under Kat’s skin as she starts to feel more like a local, knowing the places to go for the best food,the best views, the shortcuts through the maze of streets. As Spring turns to Summer, it is not going smoothly for Kat and the year she thought she was going to have starts to turn out very differently.

The setting and the atmosphere of Venice is brought alive from the page and you can see the impact that the tourists have on a city which cannot redevelop because of where it is but yet the tourists keep flocking. You become immersed on the culture, the place and the food.

However, I disliked Kat from the very beginning and as the book progressed I became more irritated by her, not because that was her character but I felt she was not fully formed enough to be taking part in the story, there perhaps needed to be more ‘flesh to her bones for the story’ to have worked. Kat didn’t have that certain something that made that book as good as some of the previous ones.

Despite this minor problem, the book is enjoyable and a perfect read if you want to be transported away for a while.

Thank you to the publisher and netgalley for the opportunity to read this novel.

A Year at Hotel Gondola is out now.