One from the archives – I wrote this review, long before I had this blog and reread the book this year (2018) in preparation of seeing the film adaptation.

There is so much to say about this book, and I am sure a lot of it has been said already. This was an impulse buy after being intrigued by the title and the cover and I was not disappointed.

The main character Juliet Ashton is an author who after having her daily column (from Spectator) of observations from the Second World War is made into a book and taken on its promotional tour, she seeks another topic to write about. Her biography of Anne Bronte not being quite as successful as she would like to have hoped.

Juliet receives a letter from Dawsey Adams, a resident of Guernsey, the only place that the Germans occupied during WW2. What then starts is series of correspondence backwards and forwards as you discover what happened to Dawsey and the members of the very quickly started `Guernsey Literary and Potato Peel Pie Society’ who used it as something much bigger during the occupation. Their books helped them escape many of the hardships that had to endure, lack of food, lack of fuel and lack of freedom. Books they saw as their way of escapism into another world, a world where they learnt something and shared it with others. What books and reading to me is all about, sharing and enjoying.

We are introduced by Juliet to her publisher Sidney Stark, a childhood friend of Juliet’s and also his sister, Sophie who has kept in contact with her. Juliet shares her fondness and subsequent love of the people of Guernsey and we begin to discover what really happened on the small island. The islanders tell us their story and fill in all the gaps in between of other characters stories. Isola, Amelia and Eben all take Juliet to their hearts and welcome her on her visit to Guernsey.

The idea of the book for Juliet to write is obvious to all but Juliet – the biography of Elizabeth, the quick thinking founder member of the society, who was punished for committing something some saw as wrong, falling in love with a German. Elizabeth was sent away leaving her child behind to be looked after by the Society in a communal sort of way. This is the person all the members of the society mention, this is the lady whose daughter Kit, Juliet befriends and eventually falls in love as only a mother can. Can Juliet bring some stability to this child’s life?

As mentioned by previous reviewers this book is written as forms of correspondence, letters and telegrams and I somewhat approached this element of the book cautiously, however I embraced it entirely and thought it was a beautiful way to actual construct a book and I was completely hooked by letter 2. Don’t ask me how but it works.

You can curl up with this book and join the society and the residents of Guernsey very easily in my opinion, and this is a beautiful book where you learn what really happens. Something that inspires you to read more about the occupation but also about how wonderful books can be to everyone whoever they are.

As for the film: 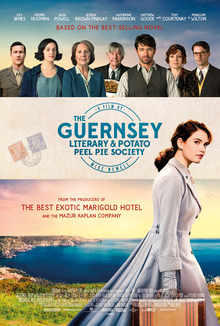 I was interested in how you get a book made up of correspondence onto screen. It did work, of course there are changes to make it cinematic but I felt it captured the essence of the book which was the main thing. Sadly none of the filming was done in Guernsey and it had a few false starts, leads and directors but it is a joyous film to watch.