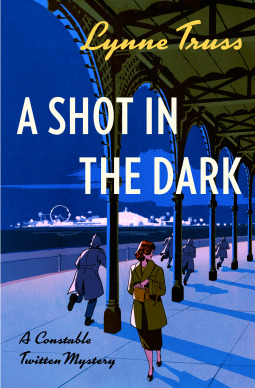 I am always on the lookout for interesting reads and especially books which have a historical element to them and so this murder mystery book set in the late 1950s and in Brighton sounded just the thing to take me away from all the nice fluffy reading I have been doing.

Inspector Steine is head of the local police department in a place where he says no crime is committed. . The Inspector is still dining out on the fact that a mere seven years previous he took the glory for two rival gangs who managed to all kill each other. Clearly there cannot be anymore crime in Brighton.

Sergeant Brunswick is desperate to be able to solve a crime and to go undercover to do this. He is thwarted at every turn by Steine.

Of course there needs to a crime – and so there is – now keep up at the back…..a hated theatre critic shot dead in his theatre seat whilst just about to reveal something about a crime he was victim of some years previous. A strong woman who escapes prison, a phrenologist who is not what he seems, a red-headed opinion poll lady, stolen jewels, dead actors and of course a murderer.

As I reflect back this was somewhat of a humorous novel, but for me it was somewhat lacking the humour simply didn’t work for me. The change in tone of the writing felt I was treated as rather foolish and couldn’t possibly understand what was happening without clear direction from the author so I was told what to think. That may well have been the intention but for me I rather make up my own mind about these things.

Towards the denouement it became rather ludicrous, that an Inspector so inept could continue and get away with what he had done, with no spark of conscience. The constable had the answers but was in no position to convince anyone of the truth and so much was left unsaid.

This was not the book I thought it was going to be and I was left rather disappointed and unsatisfied. However, it may well be a book that many other people will enjoy – so it is worth a try if you like murder mystery novels.