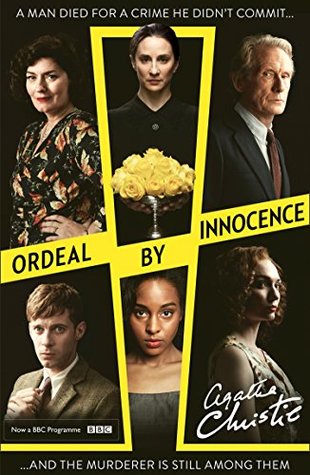 I read Ordeal by Innocence back in 2009 when it was first adapted for television by ITV and they stuck Miss Marple into it. I wanted to know the true story as created by Christie herself.

In light of the recent adaptation this time on the BBC I dug back out the review (posted on Amazon preblog) and have reposted below:

I picked up this as I have done with recent Agatha Christie novels in comparison to the TV adaptations.

Ordeal by Innocence, a recent Marple adaptation is a wide variation on the book. The murderer and motive are still the same and the first initial murder (which has already been committed in the book) is the same, other than that the book has more character depth and obviously no Miss Marple.

The detection of the real killer comes down to more than one person. Huish the original detective on the case when it is reopened by Dr Calgary’s evidence. Dr Calgary also feels responsible in bringing his evidence too late for the one originally arrested for the crime and seeks to rectify matters. Phillip Durrant, Son in Law to the eldest member of the Argyle family also piques an interest in the case, to take his mind off his disability. All members of the family then begin to doubt each other as reality sets in that if their brother (and son) did not commit the murder of their mother then one of them within Sunny Point (previously known as Vipers Point) and within the family did.

Christie uses her wonderful skills as a crime writer to let the reader see each character become unpicked and analysed, as each is dealt with in turn. Even those who have already died when the book begins. Rachel Argyle’s death at the hands originally thought to be one of her adopted sons, the ‘monkey -face’ Jacko is the key to unravelling the rest of the adopted children’s backgrounds. Their hopes and fears are dealt with when the death of their adoptive mother as well as what happened to their birth parents and Rachel Argyles apparent strict hold over them all comes up again as the case is re-examined.

Christie weaves the tale effectively and to the conclusion that the TV adaptation also reaches. The introduction of Miss Marple held more interest for me and I found that one investigator may have made the book more structured for me.

Nonetheless this is a story in the complexity of families, the murder a mere diversion to bring them altogether, no matter how dysfunctional they seem on the surface; do we really know what any of them are truly like when under pressure in being innocent……. it really can be an ordeal.

The latest adaptation was an ordeal. I watched it, because I like to be challenged and I like to have a view on what we expect something to be. And it is great to do mindless knitting to as well.

At times when I was watching it I was unsure as to what I was watching. It was very dark and tried to perhaps be too slick in its delivery. Christie did not need such fakery to set a tone, plot and pace. However I did think it brought out how horrible Rachel Argyle was and the hold she had over her ‘children’. As for the change of killer…….

Read this article – ironically on the BBC website and let me know your thoughts.

I have read somewhere that the executive producer has The ABC Murders as her next project – but that is Poirot and I am somewhat fearful of how that might turn out.

Nonetheless despite these differing reworkings. It creates debate and divides opinion and more than likely means people go back to read Agatha Christie. Surely that remains the main point?

3 thoughts on “Ordeal by Innocence – Agatha Christie or TV”