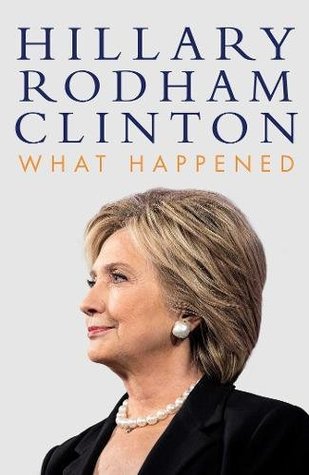 Reading biographies is not a normal choice of reading for me. The ones I do read are mainly due to the person featured as I have enjoyed their work or been fascinated by them at some point. Politically biographies even less of a choice.

So why on earth would I pick up a book about politics, politics of another country?

Towards the end of 2017 I saw the said former first lady, Hillary Clinton being interviewed by Graham Norton. Now he is not your normal highbrow political interviewer but that is what made it accessible and the main reason I went to pick up the book.

First of all I must admit to being rather lost on some of the US politics and I had to go and have a look at how the basic system of American government works. Then I felt a bit more familiar with what I was reading.

But what Hillary Clinton gets to is the heart of the matter – what happened in that US election which has changed world politics and continues to do so. What happens when you cannot distinguish between what is real and what is fake? What happens when you put every last ounce of strength and belief into something and you still come second? And what it is like to be a woman, trying to breakthrough a highly male dominated world.

Approach this book with an open mind especially if you perhaps do not necessarily agree with her politics. I admire the lady who had to go the inauguration despite having lost. She goes in her role as a former First Lady not because she lost. I remember a small video clip of her taking a deep breath, holding Bill Clinton’s hand and walking out head held high.

I admire her for that action – she knows that America needs to come together again whoever is in power.

Her policies are explained in the book and the whole process of how a campaign works – it is quite unbelievable when in this country, an election can be called on a whim and have a whole country voting within six weeks. A lot of questions are asked and this book tries to answer some of them. I got to the part that the National Rifle Association play in American politics/life at the time of another mass shooting in a school in America. I was reading something which was being played out in real life. That is quite unnerving.

I thought she would win in – and I probably wasn’t the only one. But outside influences seem to have infiltrated into the mass media and everyone in America and beyond seemed to be making different decisions all based on mistakes, lies and what this one man said.

What is strong throughout this book is the role of women. Of course Hillary didn’t break the ultimate glass ceiling in America, but I would like to think she has made enough cracks in it for others not just in America but everywhere to see what is achievable for women everywhere.

What struck me was how it seems she must have been in my office at some point – let me explain.

Hillary states in her book about the role women play, especially when they are in a male dominated world. It is the women who makes sure everyone has a drink, asks after families, children, weekends, holiday plans. Remembers birthdays, worries about everyone else before they even get to their self. And when they do perhaps behave away from what others think a women’s behaviour should be – they are called to question on it. They are given labels, because they are emotive about something. They are easily portrayed as weak. The stronger they become the less they are liked.

I work in a male dominated environment, I think less than 15% of the people I deal with are women. I am a woman, I have an opinion, I know how to do my job effectively and efficiently. I will move with the changes, I can come up with solutions and not ones that will appease everyone, but ones that some people will not like. I know the answers to questions that my boss does not. BUT I have to put up with, everyone talking to my boss first to get the answer, to have my answers questioned as being right or not because I am a woman (and in part a civilian). Being ignored when someone walks into my office, as there is a man in there at the time. YET I am the woman that makes the coffee for my boss every morning. I can count on one hand how many times he has made me coffee in the last 16 years. I am the one that remembers birthdays, asks about family and holiday and how weekends have been. I bake the cakes for sharing with colleagues. I am the one that when there is some sort emotional/medical problem with any of the female staff members I have to deal with it. I fight pretty much every day in some way in my working environment.

There is still a long way to go and if reading this book empowers some women a little bit more as it has me, then all that hard work Hillary put in was not in vain. The glass ceiling may well one day be broken – but I have a funny feeling that it is us women who will have to clear up the mess.

A real interesting read, difficult in parts probably because I am not an American and don’t truly understand its political workings. However, read the book from an outsiders point of view and you get whole different experience.

I have picked a couple of excerpts from the interview in this piece, but if you have the time google/YouTube more clips.