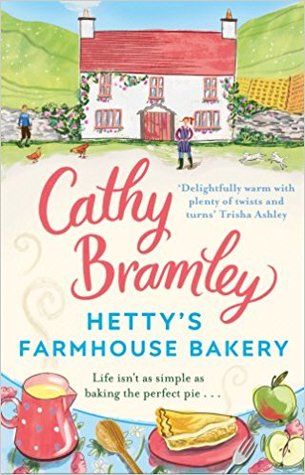 Hetty has reached a point in her life when she thinks she might want more.

She still wants what she has, Dan her hardworking farmer husband, Poppy her bright and energetic daughter, her best friend Anna there to listen to all of her woes as well as all the people she bakes pies for. But Hetty feels that she has not made an impact on the world – just on her little inner circle and doubt has set in as to whether she has actually achieved anything as Hetty Greengrass and not as a mother, wife or friend.

Hetty has done nothing other than work at the sheep farm, apart from a short sojourn of working in a Cornish pasty shop when her life suddenly changed for a while, meant she learnt the art of pastry but brought back to Cumbria to the man she loves, she simply continued that by baking the best pies – or so everyone says,

When she gets the chance to enter one of these pies into a local competition it throws Hetty into the spotlight and all of a sudden those around her are left in the background. Poppy is thrilled for her mother, but Dan does not understand why Hetty cannot be fulfilled with what she has.

Throwing caution to the wind, Hetty goes forth with her pies and faces from the past suddenly appear and questions that need answering. However tragedy strikes at home and everything pie related is but on hold as the tragedy starts a chain of events which changes lives.

I could see it coming and this is no reflection on Cathy Bramley’s writing or plotting. The book is well written and you could see that the author has reflected on all the characters and the effect the tragedy would have on them. This was not simply about one person’s issues and the rest of the characters faded into the background you got the full effect and you almost had to decide what you would perhaps do in that situation?

This book took me on a rollercoaster of emotions as I almost wanted to scream at Dan for his chauvinistic pig headedness and but then felt for him so much later on in the book. Poppy has so much determination it was great to see a young girl portrayed as such and not one which was simply a whiny hormonal mess – although that might be to come. I could mention more but  then that would spoil the book for you – go read it.

A book that you can curl up with and lose yourself into a throughly good read – like a pie baked to perfection!

Hetty’s Farmhouse Bakery is out on 22 March