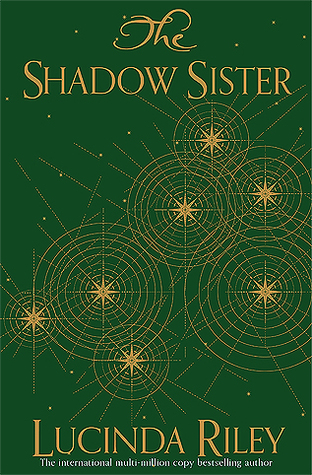 Keeping in line with how the author wants us to discover the stories of these sisters, this is the third sisters story: Asterope which means Star and is the obvious choice of name she is known to all.

We get to know a little about Star in the previous two novels and I found myself very much drawn to her and her story as despite shining bright like her name suggests, she is in fact hiding. Star herself does not know what from and with the death of Pa Salt, the sisters adoptive father, she seeks to find out more about herself and become that bright star.

To do this Star is going to have to step out of the shadow of her younger sister CeCe who since the beginning of the series I have found oppressive and claustrophobic, I was cheering Star on right from the start.

In London with her sister Cece she is dealing with living day-to-day as her sister makes her way in the world and Star stays at home, cooking, keeping house and basically being their for her sister day and night. The relationship is stifling and she decides to have her time and now speak up. Using the information Pa Salt left her, perhaps more tangible information than her previous two sisters, Star has an address of a book shop in London and the name Flora MacNichol, a small black figurine and the translated quote ” The oak tree and the cypress grow not in each other’s shadow”.

It takes a lot of courage to make that first step towards the bookshop and when she does, she opens up a whole new world to her. Orlando the eccentric bookshop owner does know something of the mysterious Flora MacNichol but he also knows that his family may know more.

Star swept along with curiosity is taken under the wing of Orlando, his nephew Rory, but also his sister Marguerite, his brother Mouse as she goes to stay with them all at High Weald. She becomes so involved in the domesticity of life there and being part of a different sort of family, that I wondered if perhaps her story was going to take a different path. But of course it was all part of Orlando’s foibles and she does learn about Flora…..

……As do we and this is where the skill of Lucinda Riley as a creator of wonderful dual narrative stories comes into its own. We are transported back to Cumbria, to the turn of the century where the Victorian Era had been only over for about 8 years and to a young lady who is determined not to marry, to not become anything of note in society but to enjoy her artistic talents and her small animals that have become her pets and to live near her idol, Beatrix Potter.

Of course women could not simply do as they pleased without family consent and it is with some displeasure that the young lady is transported to London, to use her skills as an artistic and knowledge of nature to teach two young women in the Keppel household. A household who was used to another frequent guest who had an important role to play in society.

Flora feels that she is in a game that no one has told her about, no one has told her the rules of this society that she lives in and whilst she settles well to London life, she has a great calling back to the place of her youth, to the wild landscape to where she feels most at home. Secrets are revealed and kept close from those who might be hurt by the truth. As the book progresses and as a reader we see the narrative path that the author takes us on and learn so much about Flora, her history, her future and the people she comes into contact with.

As does Star, and as she learns from the journals left by Flora, she learns a lot about herself and how she has been left with those reminders of her past and as the truth is revealed, Star suddenly shines a lot brighter and longer seems to have a shadow following her.

This is an excellent read and one that I fell into and had to keep reading, I was drawn to both narratives knowing that of course they may link somewhere along the line but also the amount that I learnt from the book as I have done with the previous two novels in the series. Only Lucinda Riley could take us from the simplicity of Beatrix Potter at Hilltop Farm to the opulent and flamboyance of a mistress of Edward VII.

Of course as the book comes to its conclusion, the mystery of Pa Salt is still of course unsolved and there are a couple of hints that I picked up through Star’s story and from the interaction with her sister CeCe and also when Ally’ story is woven into this one. My initial suspicion at book one is still there.  But now we move onto CeCe and I am intrigued her presence was very much for me felt in this book and I am looking forward to giving her chance as I get to know her story.

I think you could say that everything you want from a book (and a series) is contained within the pages, do not let its length put you off. Investing time in this author is something you will never regret.

Thank you to the publisher for providing me with a copy in return for a review.

The first three novels in The Seven Sisters series are out now with the fourth on its way in November 2017.