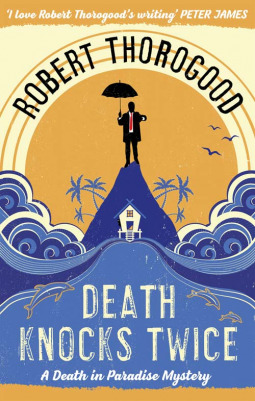 This is the third ‘Death in Paradise’ novel and this time the challenge for DI Richard Poole, stuffy english detective in his woollen suits in the Caribbean and his rather more laid back team, of Camille, Fidel and the Dwayne.

An unknown man is found dead, shot twice in an old shower room at the Beaumont’s coffee plantation. The door is locked from the inside, the window as well. He could not possibly have been murdered.

As DI Poole employs his propensity for such unexplainable acts it seems that perhaps there is more to this unknown man than first thought. The coffee plantation, seems to be running at a loss and the Beaumont family are at odds with each other as well as what to do for best about the plantation.

Of course the truth is obvious, when you know where you are looking, but with every good detective novel there has to plenty of red herrings, plot twists and perhaps another murder. Who is telling the truth?

Of course methods of detection are notoriously slow on such a  laid back Caribbean island and DI Poole has to result in some old fashion research and plenty of patience. He knows if he was back in England, wet dreary England he would not be in this predicament.

But when the answer is revealed… it is time to gather everyone together and ‘name the murderer’!

As with the previous two novels, this encompasses the bygone era of crime writing such as Christie and simply transports it to somewhere warm and appealing. With humorous characters and someone one is never going to fit in and chooses to remain the odd one out. Of course there is another plot running through this and that is the bootleg rum which is being sold on the island, and it might even mean the grumpy english man in his woollen suit might need to go undercover as a proper islander……

A good whodunnit, taking you away to where the sun shines, the water is warm and the chance of death could be quite high!

Death Knocks Twice is out now.

You can also read the first two novels A Meditation on Murder and The Killing of Polly Carter.

I hope these books are successful enough to warrant more, because when the tv series is not on, these are a wonderful stop gap.