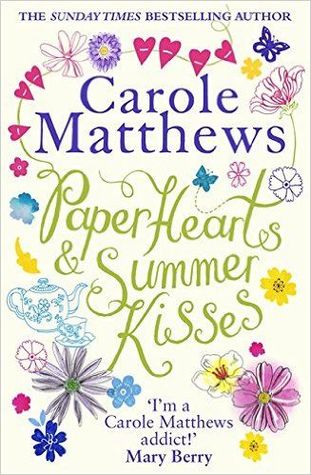 I am still fairly new to Carole Matthews books and what I have read so far have been good reads. This book was no exception.

Christie Chapman, single mother who commutes two hours each way to London to work as a legal secretary is simply living but not necessarily alive. Everything she does is for her and her son Finn. She has the love and support of her parents who are near by. But life for Christie seems to be one long commute.

When not at work, thanks to her mother she has developed a rather obsessive interest in papercrafts. She makes cards and little gifts for friends and for people at work. She sometimes sells some, but she is really just a good hobbyist whose dreams of doing such a thing as a real job are firmly locked away because of the reality of the life she has.

When her mother entered her designs into a competition and she wins the chance to turn a hobby perhaps into something more. Part of the prize is to go to America to learn more about crafting.

Christie comes back from America with crafting ideas in abundance but also the possibility of love. However reality bites and her son is not very well and she needs to devote her time to him as much as she can.

Can she do this, commute, work, craft and have the possibility of romance? Surely something has to left behind?

This is a joyful novel in parts and sad in others, but through that emotional depth, Carole Matthews has created a story which shows you how people support each other, stick together for a common goal and have faith that the decision you make is the right one for you. Do not let the fact that the novel is about crafting put you off, that is merely the vehicle that is used for expanding Christie’s world.  I was drawn into the story even if perhaps I knew how it was going to all turn out. But who cares! Not me!

Paper Hearts and Summer Kisses is out now.

One thought on “Paper Hearts and Summer Kisses – Carole Matthews”