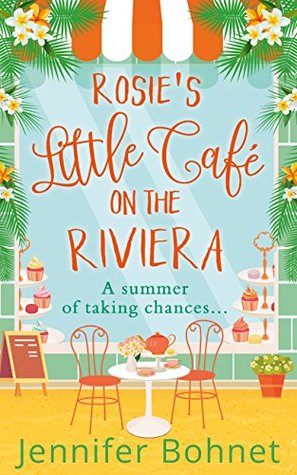 Rosie has had this dream of running her own cafe and she gets the chance to make that a reality when she decides she has had enough of being a slave for someone else to earn the credit and the money and sets out on her own to revamp and relaunch Cafe Fleur on the French Riviera. However a famous chef has taken over the hotel next door and is relaunching that, it seems that Rosie’s dreams are dashed before they even become a reality.

Despite Rosie being the main protagonist in this novel, as the title suggests. There are in fact other women struggling with their own dreams. Erika dreamt of love ever after with Pascal and their daughter, running her own small business to appeal to an eclectic sort of shopper. However, it seems fate had other ideas and now Erika has to make some decisions about how she is going to spend her life and how it is going to affect her daughter.

GeGe is struggling to make ends meet. As an estate agent, she never knows when the next sale is going to be and  with the rent on her desk going up, she needs to break out on her own. With some part-time work offered through a friend, GeGe hits upon an idea.

If these three women did not have enough to contend with, there is the added complication of old love wanting another chance and new love being rather circumspect in their actions. Add in a mother with a toy boy and a mother in law who thinks she should have more say and you have a novel that is full of character and a story which keeps you reading. My only criticism of the novel, is that I did not know how all these English people happened to be in the Riviera, more because I am nosy and want to know how they ended up there. It does not in any way detract from the plot.

The escapism of this novel is simple in its idea. The blue sky and sea of the Riviera, the walking along the shore line as the waves gently move in and out. The warmth of the sun that lasts well into the evening as it sets creating a  backdrop for anyone with a view to envy. The descriptions of the food as the cafe makes it mark as tourists and locals, sit,sip coffee, eat croque monsieur and watch the world go by,

A perfect read when on holiday or a read when you want to escape from the dull greyness and want some bright sunshine and good story.

Rosie’s Little Cafe on the Riviera is out now.