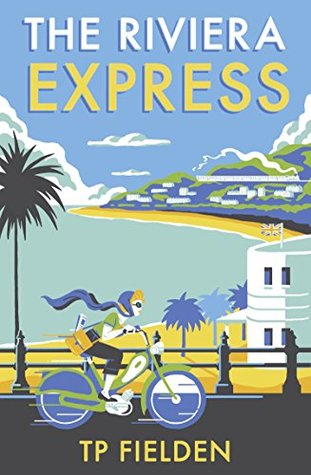 Old fashioned, golden age murder mysteries are one of my favourite genres and when I got the chance to pick this book up and read it I thought it would tick all the boxes for me. I am not sure it did?

I love the cover, it has an almost 1930s style to it, which is in contradiction to the setting of the book which is late 1950s in the South West.

When the premise gives you lines such as ” Murdered on the 4.30 from Paddington” you can almost hear Miss Marple drop her knitting needles and come scurrying. Of course it was not going to be her, but in fact Miss Judy Dimont, “corkscrewed hair reporter for the local rag, The Riviera Express.”

Gerald Hennessey is the dead body. He is a famous film actor.

But why exactly was he on a train to Temple Regis? And what relevance is the three letters in written on the window of the train carriage?

This gives enough for Miss Judy Dimont to think about when another body turns up, then someone goes missing and it seems that Miss Dimont is convinced that there is a connection between these three people.

Trouble is she needs to do all this investigating without letting her editor, Rudyard Rhys know. And there is a past hinted at there which adds to Miss Dimont’s difficulties.

All of this makes for an interesting read and as I got through the book, I had to finish it because I wanted to know who the murderer was and why. I didn’t work it out, either because the clues missed me completely by or they were too far hidden in the rather odd way of writing. From the offset it was very disjointed and did not flow easily from paragraph to paragraph and plot line to plot line. There was definite breaks and that almost jarred my reading of it all.

My focus was broken on this book and I was left rather disappointed. The book should have been a lot better as the premise, setting and some of the characters within the novel had a lot of potential. I think the writing let it down.

The Riviera Express is out now.

I would love to know your thoughts if you pick up this book to try. I am in two minds as to whether I would pick up the second book.

I also would love to know who T.P Fielden is? Goodreads- ” leading author, broadcaster and journalist”. Which makes me think that they are more well-known under another name?