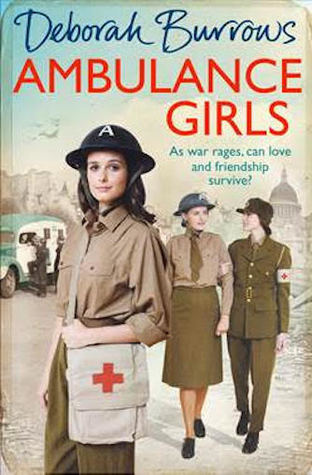 First of all I am going to answer the question as to why I chose this book? The simple reason is that I wanted to read something which had a background of history, of reality. In this case it was the Second World War, I was in London and I was in the midst of the Blitz. What made this book stand out for me from others I have read in the past was the fact that it was covering something I had not read much about. Those that drove the ambulances whilst war was raging around them.

A sense of common purpose when those working for the ambulance service had a common goal – to help. But in Ambulance Girls we are introduced to Lily, an Australian far from home who has come to do her bit and she is not feeling that sense of community at all. Which made me want to keep reading.

Lily drives the ambulance whilst her colleague David treats the patients. A friendship has developed and Lily cannot understand the hostility towards David from the other workers. She is different she has an accent, but she is not treated like him. David is a Jew.

When David disappears, everyone blames the Blitz. Everyone os displaced, but when his body appears in a place that you would not expect and when others at the Ambulance Station insist on blaming the fact he was a Jew, Lily begins to get suspicious.

She is determined to find out the truth, not just for herself but for David’s parents.

She is helped coincidentally by a good looking pilot who also happens to have been a school friend of David’s. However as Lily begins to fall in love with the pilot, she fears he knows more about David’s death then he is letting on.

Lily decides on her own investigation which puts her in danger. Can she find out the truth?

This was not your typical saga novel which I thought it was going to be when I did pick it up. I would have enjoyed it if it was but I enjoyed it more because there was a much deeper level to  the plot. Three displaced people in war who are trying to survive and find out the truth, no matter what their background.

A novel you can lose yourself in and learn from. Well worth a read as it has been thoroughly researched and I felt I was on the ground during the blitz as hell rained down around me.

Thank you to the publisher for the opportunity to read this book.

Check out the rest of the stops on this blog tour!