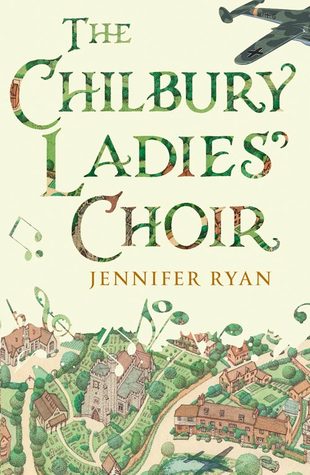 In the village of Chilbury it comes as a shock to some of the residents that the choir is to be disbanded because of war. Not because they could be in danger of becoming a target with their singing, but because there is no men left in the choir.

However, the women left behind in Chilbury have very strong views and they have an important place and a role to play. When Primrose Trent arrives in the village, she decides to restart the choir and The Chilbury Ladies Choir begins.

This book features the women of the choir, those from all different backgrounds, different ages and in some cases different agendas. Mrs Tilling is the local midwife, and as the book opens, two births are imminent, but with death already surrounding them due to war, it seems that the births are not going to be straightforward.

Sisters, Kitty and Venetia have nothing to do apart from avoid upsetting their father. Kitty and the little Jewish evacuee Sylvie,staying with them play games and explore the countryside. Venetia is discovering that war and falling in love ar not mutually exclusive and when you find someone, they can be taken away for very different reasons. Both sisters make and impact in the choir but also the village as well.

As the choir progresses, so does the story of this village.

What  makes this book any more different from any of a similar genre. That would be in the telling of the story.

The use of letters, diary entries and public notices, forms a very rounded picture of the village and characters within. It is almost like experiencing the Mass Observation movement. Here was how others felt about what was going on around them in a small snapshot of the Second World War. An d whilst you may think perhaps it would be insular in its outlook, the book actually touches on problems far away from the village green and choir.

A really unique way of telling a story, and one that worked so beautifully, you could actually pick it up and read it again. An excellent debut novel. This is certainly going to be up there as one of my favourite books of 2017.

The Chilbury Ladies Choir is published on 23 February.

This book so reminded me of the The Guernsey Literary and Potato Peel Society that I am now inclined to dig that out and reread it.