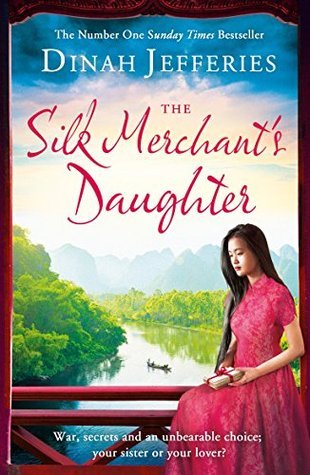 As with all of Dinah Jefferies novels, you are taken back to another time as well as another country. I have been to Malaysia and Ceylon. Now I have been transported in the case of The Silk Merchant’s Daughter to Vietnam.

Nicole Duval is half French and half Vietnamese, a dangerous position to be in. Why? It is 1952 and the Vietminh are fighting against colonial rule – colonial rule by the French.

Nicole favours her late mothers Vietnamese looks and suddenly she realises that perhaps she does not fit in anywhere. She sees her sister, Sylvie classically chic French in every way and always determined to have the last word when it comes to her younger sister, to make sure Nicole knows her place not just because of her looks but also her birth as well.

Her family let her run an abandoned silk shop in the Vietnamese part of Hanoi because she will blend in well. Trouble is Nicole is awakened to the other side of the fight regarding the Vietminh and the French and when she witnesses events she realises that perhaps not everything she knows and has been told is the truth.

Meeting Mark she has her world turned upside down as she tries to understand his role in a war that has nothing to do with him. Meeting Tran a revolutionary, her world is turned again. Nicole struggles to find herself and find those she can trust. It is going to be a testing time for her.

This is an interesting book, and a good starting point if you wanted to understand more about the Indochina wars which have dominated the middle part of the twentieth century. There is perhaps an inevitability to the plot of this story, the twists were perhaps not needed because of the complexity of the issues of the time. I admit to taking my time to understand who was exactly who and how the featured in the bigger picture of the war itself, not just the immediate family were introduced to in the book.

Ultimately a love story, but one that is fraught with danger, destruction and dynamic men. It will keep you interested, but not one of my favourite Dinah Jefferies novels.

The Silk Merchant’s Daughter is out now in all formats.