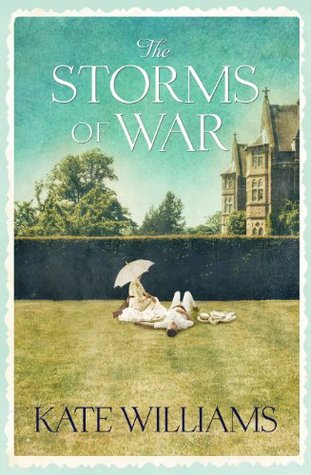 This is the first of a trilogy of books to feature the de Witt family.

Rudolf is the patriarch of the family. German in origin, he has embraced everything about the English way of life and feels that he has arrived when he moves out of London to a country manor, Stoneythorpe Hall.

His wife Verena was clearly meant for a better marriage in her parents eyes but she settles with Rudolf whom she loves. As she does all her children, although I am not sure if she loved some more than others. The book made me think that.

Arthur is in Paris and very little is heard about him, apart from the belief that he will one day return. Michael at Cambridge, destined for great things but very lost in life. Emmeline is to be married, bringing together families and wealth. Everything is to evolve around Emmeline. Finally Celia, the youngest trying to understand the ways of adults as she moves from being childlike to one herself.

It is August 1914 and the world is going to change forever as is the de Witt family and Stoneythorpe.

Whilst many well-worn topics and themes are covered in this novel. For me much more was included from Kate Williams. We see life in the trenches, in rather graphic detail and as a reminder of those who suffered for so little gains overall. Love is covered in many forms and guises and whilst I was surprised about its inclusion the trenches it gave the whole story another angle. The importance of the work women did during the war is not touched upon, but brought to the front, literally in the case of Celia as she finds herself not far from the Front. Whilst at home Emmeline has involved herself with some rather sinister movement.

Ultimately there is love within the novel.

But with love there comes separation and loss.

With separation there comes danger.

We are taken from a idyllic countryside, to London, to the trenches, and back again, through all of the children with the exception of Arthur whose absence in itself is strange. Even war touches Stoneythorpe Hall.

An emotional read, which takes you to dark places and shows the war affected everyone and I was hooked with what was happening to the de Witt family. I am glad there is to be more, as I know I want to go back to this place, to this family and watch how war affects those left behind and how society changed because of it.

I was lucky enough to get my copy of this book signed by the author at last years Guilford Book Festival Readers Day after hearing her talk. She is a fascinating lady and one I admire as she clearly is passionate about her subject, History. The closest I get to indulging in it now since leaving university is by reading books like this. Long may it continue.