Kit had been nursing during the Second World War and had moved into midwifery, she was only a couple of deliveries from gaining her certificate, until tragedy strikes. Exhausted from the war and running away from finishing something so important to her, she along with her rather eccentric mother, Glory escape to Wickham Farm.

Here she becomes involved in the setting up of a charity to send midwives to India. The timing could not be more fractious, with India newly independent and going through momentous changes. They no longer trust the British, who some see as causing more problems than solving them and they certainly do not want to be told what to do when it comes to something as intimate as childbirth.

To help the cause is an Indian doctor, Anto who has been England for a number of years, training to be a doctor. When he arrives at Wickham Farm, Kit and Anto begin an affair, that moves very swiftly into marriage. 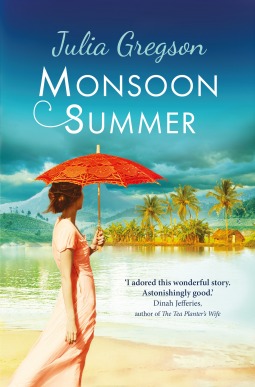 Kit’s mother is horrified, despite being half Indian herself, she has always tried to distance herself from that past. Anto’s parents are equally appalled as he plans to bring his new English wife back with him.

What is more appalling to them all, is that Kit wants to help at the midwifery charity home in India, she wants to be able to help. However she becomes involved very deeply in the politics of the position of women in the Indian society, the traditional ways that are held in esteem regarding childbirth and the role of midwives therein.

Kit’s simplicity at what she thought would be easy being with the man you love despite the change in location and in culture leads her down some dangerous paths and puts many people at risk.

The strength of the storyline by Julia Gregson is brought to the forefront by the location and setting she always seems to choose for her books. IN start contrast we have the desolate Wickham Farm, the leaking roof, the snow, the cold, the lack of facilities. To the heat of India, the rains, the smells and the vibrant colours which seem to simply jump off the page when you read this story.

I loved this book, the storyline kept me gripped and I had no idea the path that it, let alone Kit was going to take. Added to this what I learnt about midwifery away from a clean, sanitised English hospital setting was eye-opening to say the least and a little bit frightening too. The politics within the book is not stuffy or overbearing it all adds  to the plot and the depth of the story.

A well written story of a period of history which was not that long ago but still resonates very much with the world today.

I have loved all of Julia Gregson’s books and this is no exception.

Monsoon Summer is out now.