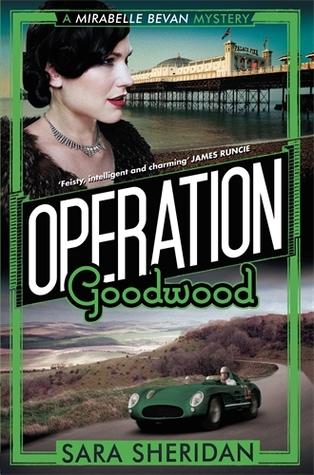 I am back with Mirabelle Bevan and her rather feisty but lovable side kick – Vesta Churchill, now Vesta Lewis. All seems to be going well in the Debt recovery agency that they run.

Mirabelle seems to be finally moving on from the war. However, she is soon plunged into another mystery when she is rescued from a fire in the flats where she lives in Brighton seafront only for her neighbour to perish.

She did not realise that Dougie Beaumont, racing driver,  she saw racing at Goodwood whilst out with Superintendent Alan McGregor is the man who lived in the flat above her, the man who died.

With probably survivor’s guilt which would have affected many during and after the war, Mirabelle wants to know more about Dougie Beaumont.

However this well-known and well-loved racing driver, seems to have some secrets and ones that his family may not want to be told. Mirabelle’s investigations take her to Goodwood and the thrill of the racing scene but there seems to be an undercurrent to this glamorous lifestyle that she cannot quite work out.

Hampered by Superintendent McGregor’s insistence that she does not get too involved, she enlists Vesta to make enquiries and they both find themselves in London, looking into the murkier parts of the press industry and relying on some faces from Mirabelle’s past to provide them with information.

The thought about a book having something to do with car racing, may seem to put you off, but actually whilst it is crucial to the story there is much more to it than that as there is in all of the Mirabelle Bevan books. Steeped in great social history, not rose-tinted nostalgia, Sara Sheridan is certainly not afraid to tackle some of the more unsavoury parts of life in the nineteen fifties, which nowadays we would not give a second thought about. That is what makes this book and the four previous ones work so well.

A novel that goes along at the pace of watching a car around a track, and will keep you hooked right until the chequered flag is waved and the results are in and of course it was obviously the right conclusion. I never see them coming, and they have the true denouement of a Christie novel without a moustached Belgian or knitting spinster in sight!

Operation Goodwood is out now.

I read book four, British Bulldog in this series of what is to be eleven books, earlier this year. But as I am not reviewing every book I read and also conscious of reviewing book after book that come from a ‘set’ or ‘series’ I chose not to review that one. I reviewed thanks to the generosity of being given the opportunity to read it.

I look forward to book six and the fact that Mirabelle Bevan has been opted for television – what better slot than the Sunday evening one! I cannot wait but of course will have to.