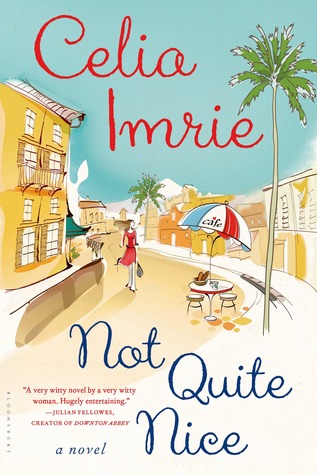 I am always sceptical, very in fact when it comes to ‘slebs; moving onto writing fiction. Always with the cynicism that was it them that really crafted such a novel. I have been proved wrong on occasions, but in this case I think the jury is slightly still out.

Theresa, fed up with being treated as downtrodden babysitter by her daughter and being retired early from her job decides to shock everyone and probably herself into moving to France, a small town just outside Nice. Her ghastly daughter, Imogen who was wonderfully written and annoyed me almost immediately, gives her only a few weeks before she is back with her tail between her legs. And quite possibly what is Imogen going to do for free childcare now her mother has upped and left.

There she finds some other expats who at similar times on their lives and similar ages have found that settling into life in this small town is just what they need. The warmth of the sun and the relaxed way of life is very much different from that in Britain.

Theresa soon starts to find her way, somewhat naively when she has very little in terms of belongings but she soon settles into some strange friendships with glamorous Americans, forgotten tv stars and occasionally naked australian poets and a rather suave looking man.

As the sun shines down, the sea forever blue glistens in the harbour as wine is sipped in the early evening, it seems Theresa has made a good decision until that is events start to happen and everything seems to be out of control.

A very summery read, which sets the characters at an older age than in a lot of women’s fiction. Brought to mind Hilary Boyd’s debut novel Thursdays in the Park if you need a comparison, although not quite as good.

A good example of women’s fiction and I did forget who the author was as I devoured the book. I do want to read the next one, Nice Work(If You Can Get It) because I have this feeling that the writing will get stronger and my scepticism will be unfounded.