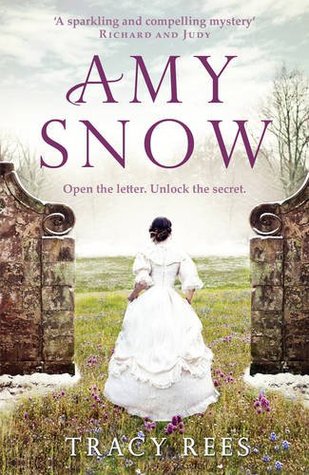 No one knows who Amy Snow is, where she came from or what her true name is. She was named Amy by Aurelia Vennaway who found her in the snow one January at Hatville Court.

Unfortunately her start in life is not one of warmth and kindness. She is hated by the owners of Hatville Court and the kitchen staff who are tasked with looking after her find her an additional nuisance to deal with. She is neither servant nor companion, employee or friend. Amy Snow exists to no one at Hatville.

Aurelia though has other ideas and is very strong-willed against her parents and Amy becomes embraced in Aurelia’s life.

Aurelia has a very different outlook on the way her life is to go and whilst it seems that the newly crowned Queen Victoria can choose her man for love, Aurelia cannot according to her parents. Amy is surplus to requirements and feels bereft,  but there is more grief to endure when it turns out Amy is ill and her life is to be cut short.

Amy becomes her companion and upon her Aurelia’s death she learns of one last gift handed to her as she leaves Hatville Court.

It is this letter that Amy has to decode as she goes on a journey and revisits the paces Aurelia has been, meets people who Aurelia became friendly with and finally works out the secret that has been kept hidden.

Along the way Amy learns about herself and she finds herself in shock and turmoil with some of those she encounters and how very much out her depth and social class she is, despite the frippery and money that she has gathered along the way.

I love books that feature letters as along with Amy I unpick Aurelia’s story and search for the clues and the truth. I had worked out what the secret was, but was still swept along with the journey. I always feel privileged to share such a personal item in novels, it can be used very effectively to tell a story as it is in this book.

Being set in Victorian England, there are obviously going to be comparisons to some other great fiction of the time, Jane Eyre springs to mind, orphan struggle, class position, romance and the search for something. Being the time of Dickens and he is referred to in the novel itself brought with it the descriptions of Victorian life away from the page. The darker places of cities as well as the bright lights of balls, calling cards and receiving guests. The thought of travelling two days to Bath from Twickenham by coach seems unbelievable when it can take mere hours now. All of this is and more is packed into the novel.

At over 500 pages this is a book to sink into and I did not want it to end, I would purposely put the book down even though I wanted to know what happened next, so I could enjoy Amy and ultimately Aurelia’s story for a little bit longer.

For a début novel, this is a good example of historical fiction and it was a complete joy to read.