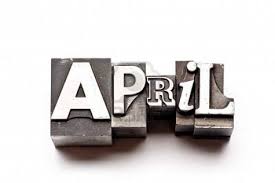 The 8th May seems to be very late in constructing and writing an April Roundup post, but life has seemingly run away from me and I very rarely get to my laptop now and only use a computer for personal stuff at my parents house and I find the iPad not conducive to my sort of writing, which is a lot of reasons in telling you why this post is so late!

Nonetheless here it is.

A bumper month of reading, helped by having some time off, but I have still yet to get ahead of myself in terms of number of books being read in the year.

April was the month of comfort reading. No more so than reading Rosie Goodwin – Dilly’s Sacrifice which I had on my kindle thanks to netgalley for a while and had yet to get round to reading. I did and was so pulled in with the story that I immediately sort out book two in this trilogy Rosie Goodwin – Dilly’s Lass and would have got hold of book three if it wasn’t for the fact that I did not want to read the hardback or could justify paying the kindle price so I am going to have to wait (im)patiently until August when the paperback is released. They are books which pack a lot in, tell a great tale and remind me of books I read when I was younger and could share with both my grandmothers – a good aga saga!

Sharing books and the love of them is how I came to pick up Agatha Christie – Appointment with Death. I decided to take part in the 1938 Club ran by Simon and Karen as I rarely take part in my reading events. I thought this one was manageable and it also meant I could tick another book of my Agatha Christie List. I think the next one in October is going to be 1947 – I am sure there is a Christie book to cover that year. Do keep an eye out for it.

When I chose what to read, I try and keep a measured amount of reading off my own shelves which are heaving but also all the lovely new novels and authors that netgalley has introduced me to. Just of late I have been a bit click happy in requesting books. One of those books was Helen Pollard – The Little French Guesthouse and was a book which had a bit more depth in it than your average beach read/chick-lit. I felt I was transported to the French countryside and could feel the sun on my skin.

Marcie Steele – The Second Chance Shoe Shop was a different and I felt it had something missing, it was enjoyable but that is all. As I said in my review:

……it was not a book quite yet there in the league of well written chick-lit. It had something missing for me and I am unsure as to what that is.

I still don’t know what it is.

I did not need to take a chance on my next choice of book Veronica Henry – How to Find Love in a Bookshop. Out in June, Veronica Henry is back with another great novel, and what more could a girl want than to find love in a bookshop!

Despite all this new and modern fiction I do really enjoy historical fiction and whatever tale it wants to tell me with a background in the past. This was where I decided I would pick up début novel Tracy Rees – Amy Snow. Following the trail of some letters Amy is trying to work out who she is and possibly where she came from. Set in the Victorian era and references to Dickens, I felt I was transported away.

Historical fiction can clearly work in murder mysteries and comedy and you can get all this combined whenever you visit Flavia. It has been a while and so I picked up Alan Bradley – I am Half Sick of Shadows and took myself back to the chemistry obsessed Flavia and see what dead body she is going to across this time. As well as trying to catch Father Christmas in the act, with home-made glue! I smile just recalling the book.

Not all of these books have been reviewed. Those from netgalley have and whilst I might have read them in April, they might not appear on my blog until later in the year to coincide with publishing dates.

The rest is simply because I have not had the time and also that I made the decision to not review everything I read. It has felt less pressurising and it no doubt will continue in the coming months. I am enjoying what I read.

That was April, albeit a bit late and May is in full swing and so I need to get on.